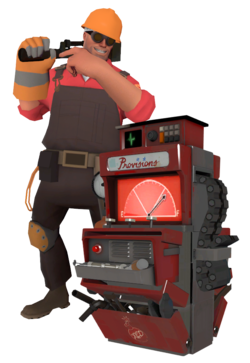 The Dispenser, also known as the Dispense-O-Matic 9000 Provisions Dispenser, is a building that can be constructed by an Engineer using the Build Tool. The team-colored device is a sort of gas station pump with various supplies inside and a CRT screen with a gauge.

While operational, a Dispenser provides an endless source of health and ammo to all nearby players on the owner's team (as well as disguised enemy Spies), in addition to generating and supplying a limited but regenerating supply of metal to any friendly Engineers. A single Dispenser can heal multiple players at once, lowering the burden of friendly Medics, especially if many teammates are on fire or there are more important classes to heal. Dispensers are also more effective at keeping weapons restocked than any ammo pickup, which reduces teammates' dependence on health and ammo kits. This results in Engineers having more ammo kits to use themselves, allowing them to acquire more metal from the kits to build and upgrade their buildings. However, Dispensers themselves are defenseless and take considerable effort to build up to full power. If a team can defend their Dispensers adequately, they form an anchor to the team's hold on an area.

Dispensers can prove to be very valuable in supporting a team when used effectively. Teammates that have been ignited can put themselves out by simply standing near the Dispenser. In addition to being an alternative health source, Dispensers act as a portable ammo source as well. They can provide additional metal for other Engineers to use. Dispensers also attract many teammates to one area, which can help to better forward an attack, particularly if the team is scattered and ungrouped. However, it can also make the group an easy target for rocket splash damage or incoming grenades. A Dispenser does not hand over new weapons if the player modified their loadout; a Resupply locker is required to do so.

The Dispenser costs 100 Metal to place, 200 Metal to upgrade to Level 2, and a further 200 to upgrade to Level 3, for a total metal cost of 500 metal. Each upgrade increases the Dispenser's health, as well as its outputs of ammo, metal, and health. While being constructed, a Dispenser's health increases until reaching 150 upon completion. A newly built Dispenser contains 25 Metal and thereafter generates 40 Metal every 5 seconds unless upgraded. It can hold up to 400 Metal, as represented by a gauge on the front of the Dispenser. A Dispenser can be manually rotated to face a different direction before one builds it. When the blueprint is shown, using the alternate attack button (default key: MOUSE2) rotates the blueprints 90 degrees counterclockwise per mouse click. A destroyed Dispenser (regardless of level) leaves behind 50 Metal (5 parts, 10 Metal/half ammo each) that can be picked up as metal or ammo by all players, regardless of team affiliation. In Mann vs. Machine, Dispensers can be upgraded at Upgrade Stations to increase their health and range. Using an Upgrade Buildings Canteen also instantly upgrades the Dispenser to level 3. 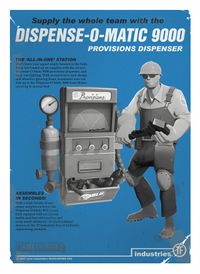