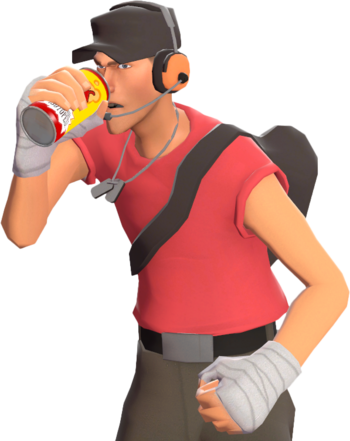 The Scout has the fastest movement speed of the nine mercenaries, the ability to double jump, captures objectives and pushes payloads at double the regular speed, and deals a consistent amount of damage from short to medium range. These attributes make him great for quickly completing objectives, such as capturing Control Points, and optimal for one-on-one battles when timed correctly. However, his maximum base health of 125 makes direct confrontations against some mercenaries difficult and risky. Optimal combat involves circle strafing or weapon heckling, techniques that help the Scout avoid and simultaneously put out as much damage as possible.

The Scout's double jump is incredibly versatile; use it well.

An experienced Scout alone is powerful, but two or more, or even a squadron can cause massive havoc for the enemy team. A coordinated ambush can easily take down any enemy.

While it may seem unlikely, a Soldier-Scout duo can easily decimate any obstacle that happens to move into their sights; with the combined effect of the Scattergun and Rocket Launcher's close to medium range power, it is unlikely that any target will survive long enough to fight back.

The Pyro and Scout are both excellent and efficient ambushing classes. Due to their strengths at close range, a coordinated ambush can result in killing practically any enemy without too much effort.

Another unlikely team up, the Demoman and Scout are complete opposites of each other; the Scout focuses on quick, offensive ambushing, while the Demoman focuses on defense and keeping the enemy at bay from mid-range. However, when combined, they can fill a number of roles together.

The Heavy and Scout are complete opposites when it comes to movement speed; the combined force of their weapons, however, is not much of a laughing matter.

Scouts, at first, don't seem to be a potential Engineer buddy. However, the Scout's abilities not only make up for what the Engineer lacks, but can also be a vital part of a base.

A Scout and Medic can make a great team. The Scout's main job is to protect the Medic at all costs and escort him to other teammates so he can heal them as quickly as possible.

The Scout and Sniper make up for each other's range weakness. The Scout focuses on close-range combat while the Sniper focuses on long-range combat, allowing the both of you to guard one another.

It's very rare for a Scout to ever team up with a Spy, but it's possible and has potential, due to each classes' tendencies to ambush on command.