From Team Fortress Wiki
Jump to: navigation, search
This page contains basic strategy for the Scout. For more advanced strategies, see Community Scout strategy. For how to play against the Scout, see Anti-Scout strategy. 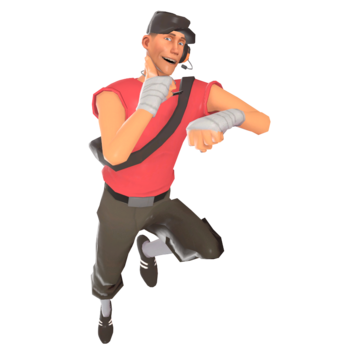 The Scout is the fastest and arguably the most mobile class in the game. His speed and ability to double jump lets him access ambushing routes and get to places before most other classes. Combine this mobility with his Scattergun's high damage output, and he is one of the best at picking and winning duels. The Scout can ideally control the outskirts of the battlefield by picking off important or damaged enemy targets, then support his team at objectives with his increased capture rate.

The Scout has a low health pool and relies on completely avoiding damage to survive; his double jump lets him escape knockback, fall damage, and explosions. Dodging becomes harder when being attacked by multiple enemies at once, generally dissuading the Scout from the frontlines. Additionally, not everything can be dodged; weaponry that can slow or track players, such as Natascha or the Sentry Gun, are deadly to the Scout.

When fighting, don't rely on your mouse alone to track foes. Use your movement to keep the opponent centered on your screen, firing whenever your cross-hairs and opponent match up. This allows you to focus on moving efficiently and erratically, making you harder to hit, while at the same time making your aim smoother and more accurate via prediction. Find what distance you operate at best and use your speed to maintain it; extremely close-range combat favors quick jumping to avoid enemy shots fired downward, while more moderate distances allow you to stay grounded and continuously strafe from side to side.

At point-blank range, your Scattergun kills most classes with just two well-placed shots. Use your speed to avoid attacks and get in close range to deal maximum damage. The Scattergun runs out of ammunition quickly and you are fragile, so take cover or run circles around your enemies while reloading. When fighting distant enemies, switch to your Pistol, as the Scattergun's wide bullet spread means it deals minimal damage at long range.

The Force-A-Nature deals heavy burst damage but must be reloaded often, so it is best used as a hit-and-run weapon. Its shots inflict knockback on both you and your target, leading to some interesting applications. Your enemy is launched backwards proportionally to the damage dealt, allowing you to land easy follow-up shots or launch them into map hazards. The self-inflicted knockback allows you to Force jump to even more locations. If you actively jump while in combat, save your extra jump until after you've fired the Force-A-Nature; the knockback will leave you suspended in midair and vulnerable. For efficient ammo usage, always fire your two shots before reloading; reloading with one shot in the barrel will discard that shot.

The Shortstop is a cross between your Scattergun and Pistol, holding 4 shots that all reload in a single clip. While it deals less damage than the Scattergun, its narrow bullet spread and fast reload time make it reliable at longer ranges. While the Shortstop is deployed, you receive 20% greater knockback; explosions will throw you around and disrupt aiming, but can be used to escape a losing fight easier. Alternate fire is a melee shove, which is best for keeping enemies at optimal mid-range firing distance or throwing them into environmental hazards.

The Soda Popper is similar to the Force-A-Nature, but does not have its knockback effects. Like the Force-A-Nature, it is best used as a hit-and-run weapon, although its faster reloading speed makes it more useful in prolonged combat. Damaging enemies builds a "Hype" meter. When the Hype meter is full, alternate-fire will put you into Hype mode, allowing you to jump up to five times in midair for 10 seconds. Hype mode is incredibly useful for accessing routes that normally require another class's explosive jump, and staying in the air to dodge attacks when dueling. However, Hype mode is not usable as often as your other mobility options.

The Baby Face's Blaster has a clip of only 4 bullets and initially reduces your movement speed by 10%. Dealing damage with any weapon charges a Boost meter, which increases your speed by up to 30% at 100 damage dealt. Taking damage lowers Boost, while double jumping costs 75% Boost. Overall, first build Boost via ambushes or at a distance with the help of weapons like the Winger, Flying Guillotine, and Wrap Assassin. Then, use the speed increase to completely avoid taking damage. Keep in mind that you will sometimes need to sacrifice your speed to access a side route or dodge enemy attacks that would remove your Boost anyway.

The Back Scatter deals Mini-Crits when fired at the backs of enemies in close range, but has a reduced clip size and is less accurate. The Mini-Crits now allow you to kill the weaker classes with just one well-placed shot. However, the reduced accuracy may be a problem when you can't get close to your target. Overall, this weapon is best for flanking or punishing fleeing enemies, but not for dueling.

The Pistol is a backup weapon that is accurate at medium range, primarily used for finishing off wounded targets or fighting at range. It reloads quickly and can be used to harass enemies, cover a retreat, and take out Sentry Guns from afar. Keep track of the Pistol's ammunition, as your three extra magazines can run out surprisingly quickly.

Bonk! Atomic Punch is a utility item that, when consumed, grants invulnerability to all enemy attacks. Its main use is to dodge or draw enemy fire. For example, you can use it to get past Sentry Guns, retreat safely, bait Demomen into detonating their sticky traps, or block choke points. Outside of combat, it can also be used to negate afterburn or bleeding. Even though you are temporarily immune to damage, you can still be pinned down by knockback, so be careful to not get cornered. You are encouraged to retreat as the effect wears off, as you are Slowed for 5 seconds based on the damage you negated, up to 50% for absorbing 200 damage.

Crit-a-Cola is a utility item that rewards you for taking risks. When consumed, it grants you guaranteed mini-crits for eight seconds. However, firing any gun or swinging your melee weapon will cause you to also take mini-crits for five seconds. Crit-a-Cola is best used before an ambush or other situations where your opponent can't see you coming. Alternatively, pair Crit-a-Cola with the Shortstop for ranged harassment, as mini-crits don't have damage fall-off. The Crit-a-Cola boost does not stack with the boosts of other items, such as the Buff Banner or Jarate.

Mad Milk is thrown like a grenade and inflicts a temporary debuff upon its victims, allowing any member on your team to heal by damaging an opponent under its effects. It can be used in single combat for yourself or large firefights for your team, especially if you lack a Medic. Additionally, Mad Milk can be used to extinguish teammates and reveal cloaked Spies.

Like the Pistol, the Winger can be used to harass enemies or cover a retreat. When compared to the Pistol, the Winger's increased damage is best for short encounters; it deals less damage over long periods of time due to its reduced magazine size. The 25% added jump height lets you access alternate routes easier.

The Pretty Boy's Pocket Pistol recovers three health per hit, but expends its 25% reduced magazine quickly. The Pocket Pistol can be used mid-combat to quickly recover some health, but you should switch back to your primary weapon for finishing fights.

The Bat swings rapidly but deals less damage than your Scattergun. The Bat is best used to finish off dodgy enemies or other easy targets when you run out of Scattergun shots.

The Sandman slightly lowers your maximum health, but grants an alternate fire that launches a baseball capable of slowing enemies. The baseball's slow duration starts at 1 second, but can reach up to 7 seconds depending on how far the ball travels. Slowing an enemy will give you a chance to move in for the kill or retreat safely. Additionally, you can use it to provide support in large firefights by slowing certain enemies to separate them from teammates, such as Medics and crit-boosted enemies. Your low health pool makes the small health penalty significant, so make sure you actually use the baseball.

The Holy Mackerel functions identically to the Bat but announces each hit in the kill feed. A hit that triggers a Spy's feign death will appear as a hit, not a kill, allowing you to track down a Spy using the Dead Ringer.

When you have the Candy Cane equipped, any kill will cause your victims to drop health packs that can be used to heal your team. The Candy Cane does not need to be the active weapon for this bonus to occur. Ensure that enemies don't reach the health kit first and be wary that approaching the health kit may draw attention. The Candy Cane also increases your vulnerability to explosive damage, meaning that a direct hit from a rocket or grenade can now kill you in one hit. A Spy who uses the Dead Ringer to trigger a feign death will not drop a health pack and is easier to discern.

When striking an enemy, the Boston Basher inflicts the bleed status in addition to the standard Bat damage. However, any missed melee attacks will cause you to damage and bleed yourself instead; try to attack only if you're sure the strike will connect. Striking an environmental object results in no self-damage, so the weapon is slightly less risky to use in enclosed areas.

You can use the self-damage to help a Medic fill his ÜberCharge meter and the bleed effect to track down cloaked Spies. Damaging yourself will inflict a small amount of self-knockback that can be used as an additional jump in order to reach higher areas, albeit at the cost of a significant portion of health.

The Sun-on-a-Stick's main draw is the 25% fire resistance while deployed. It deals 25% less damage, so don't actually fight with it. As the Scout, your low health pool is quickly chipped away by the Pyro's afterburn. If you are set on fire, deploy the Sun-on-a-Stick while searching for healing to survive longer. Against ignited foes, the Sun-on-a-Stick deals guaranteed critical hits and is one of your best damage options. However, you and the Pyro excel at close-range duels and can often finish off an enemy without help, so you might not be able to use this combo frequently.

The Fan O'War deals little damage but can mark victims for death, causing all damage taken to be mini-crits. Tag an enemy with it, then either switch to another weapon or have your team finish the job. Weave into melee range of groups carefully, as the Mark of Death can only be inflicted on one enemy at a time.

When the Atomizer is your active weapon, you have access to a triple jump, which opens up more routes of travel. In combat, the Atomizer is useful for engaging foes from odd angles, as its melee attacks also mini-crit while you're airborne. The Atomizer deploys 50% slower, a significant delay when trying to escape instead.

Similarly to the Sandman, the Wrap Assassin launches a weak projectile that inflicts a bleeding effect on struck enemies. Use the projectile to weaken stronger enemies before moving in with the Scattergun. Keep using your primary weapon at close range to negate this weapon's extremely low melee damage.