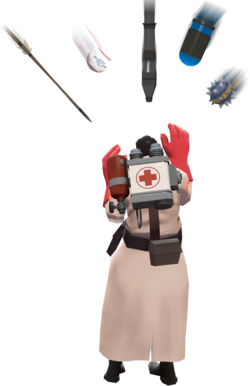 Projectiles, unlike hitscan bullets, do not travel instantaneously across the map, but rather at a preset speed, differing depending on the projectile, and are often subject to engine physics. Projectiles use a large hitbox shared by all classes to judge contact, the same as that used by melee weapons, other players, and the environment. The damage of a projectile is usually determined by the distance the target is from the attacker upon collision or, alternatively, from the spot said attacker was at upon death. Many projectiles have unique properties, which differ depending on the weapon. Projectiles are not affected by lag compensation.

A Heavy's dropped Sandvich, pieces of destroyed Stickybombs, buildings, Sappers, and dropped weapon pickups from dead players are not considered projectiles. Although they are launched and subject to engine physics, they have different properties.

The properties of projectiles differ depending on the weapon that fired them. Projectiles often damage on contact like a hitscan bullet. Alternatively, many projectiles generate explosions upon contact, or in the case of the Demoman, generate explosions and destroy themselves when a certain time has passed (in the case of grenades) or at the Demoman's cue (in the case of Stickybombs). All projectiles except rockets and energy blasts are subject to gravity and fall downward. The damage of the projectiles that are fired from the Demoman's weapons (after five seconds, in the case of stickybombs), the Flare Gun, the Detonator, the Manmelter and the Huntsman are not affected by distance; however, the Crusader's Crossbow has an inverted damage falloff (which means damage and healing increase by distance).

Certain projectiles apply effects upon contact. The baseballs launched by the Sandman apply a slowing effect, while the Wrap Assassin's bauble inflicts bleed, and flares set enemies on fire. Jarate and Mad Milk do not deal damage at all, but instead apply their respective effects to enemies, temporarily remove the Cloaking ability from Spies, and put out fires within their splash radius. The Blutsauger and Black Box restore health to the firing Medic or Soldier on a hit, and the Crusader's Crossbow heals and damages a teammate or enemy respectively. The Huntsman can also be made to apply the fire effect when ignited with any flamethrower. Note that effects are not applied when the target is ÜberCharged.

Flames are large, damage-dealing, player-igniting 'particles' fired from the Pyro's primary weapons: the Flamethrower, Backburner, Degreaser, Rainblower, and Phlogistinator. The Dragon Fury launches a different type of projectile, similar to a rocket, that share properties with flame particles. These particles use the projectile hitbox to judge contact, like projectiles, but have both a limited lifetime and a maximum distance, and have their damage largely determined by time since being fired rather than distance. Also unlike other projectiles, flames do not stop when they collide with players or buildings, but instead continue moving and dealing damage to other objects until their maximum lifespan is reached. Flame particles can bounce on the environment. They also have a "negative" curve that cause them to drift upward, and their momentum is partially determined by the firing Pyro's movement.

Explosions are instantly damaging splash effects produced by projectiles (and the Kamikaze taunt and Ullapool Caber melee weapon), that usually have significant knockback. They also use the projectile hitbox. The knockback, size, and damage of explosions vary depending on the projectile that generates them. Explosions cannot pass through walls, and thus conform their shape to the shape of their surroundings. They deal damage and knockback proportional to the amount of hitbox encompassed in their radius and the distance between their origins and the midpoints of affected players. Explosions can hit the player that fired them, which may be used to augment jumping abilities.

Rockets fired from a level 3 Sentry Gun have their damage calculated from the distance of the Engineer to the target, and not from the Sentry to the target. The compression blast and splash effects from Jarate and Mad Milk are sometimes classified as explosions, and have similar properties, conforming to walls in the same way. Explosions (with the exception of the Scottish Resistance and Quickiebomb Launcher) will not destroy stickybombs but will knock them away.

Syringes, fired by the Syringe Gun, the Blutsauger, and the Overdose, are the only projectile among Stock weapons that cannot be destroyed or reflected by a compression blast. They also deal bullet damage, thereby destroying Stickybombs and inflicting bonus damage to enemies with a weakness to bullets, which is also unique among projectiles.

Other properties of projectiles

The compression blast ability of the Pyro's primary weapons can reflect all projectiles except syringes and small energy beams from the Righteous Bison and the Pomson 6000. With the exception of Stickybombs, once reflected, projectiles switch ownership to the Pyro who reflected them and deal Mini-Crit damage on enemies they hit.

The energy orb from the Short Circuit destroys almost all projectiles in the game, with the exception of projectile-based weapons that cannot be reflected (etc. Righteous Bison, Pomson 6000).

The Huntsman's arrows critically headshot when they pierce a particular area of the projectile hitbox, around the head. The Backburner Crits when attacking the back of a player's hitbox.

Stickybombs on surfaces can be destroyed by bullets, syringes, melee weapons, the energy orb from the Short Circuit, the charged shot of the Cow Mangler 5000, or the Scottish Resistance's and Quickiebomb Launcher's stickybombs.

The complete list of projectiles in Team Fortress 2 is shown below. Note that "Speed" accounts for the initial movement speed of a projectile before air drag becomes prominent; this applies for the Sandman's baseballs, Wrap Assassin's baubles, Jarate and Self-Aware Beauty Mark, which have different travel arcs and maximum distances despite appearing to be identical.