The Sniper is a long-range support class that focuses on the elimination of high-priority targets. As a light class with only 125 health, the Sniper generally stays behind his team's lines to avoid taking heavy fire. The Sniper is one of the three classes that can gain headshot bonuses (the others being an Ambassador-wielding Spy and a Pyro who can compression blast Huntsman arrows). Headshots are guaranteed critical hits, and often result in an instant kill when fully charged (with the exception of anyone with a bullet resistance). The ability to do this consistently can set apart an amateur Sniper from an elite one. 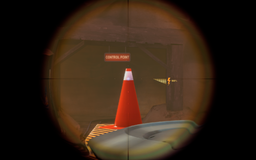 Keep the dot on a nearby object so enemy players won't suspect you to be there.

Generally, a Sniper should be using the power of headshots to their advantage to kill or control enemies. However, there are cases where a bodyshot may be easier or more useful.

Note: If random damage spread is enabled, body shot percentages will vary. All classes but the Pyro and Sniper have gear that can increase or lower their total health, so only use this table as a guide. The Soldier may use the Battalion's Backup, reducing your damage and preventing you from scoring headshots on his affected teammates: Look for a circle around their feet.

The Huntsman is an unlockable primary weapon for the Sniper. It gives the Sniper a bow to fire arrows as projectiles while removing his ability to scope.

Note: If random damage spread is enabled, body shot percentages will vary. All classes but the Pyro and Sniper have items that can increase or lower their total health, so only use this table as a guide.

The Sydney Sleeper is a craftable primary weapon for the Sniper, based on the Sniper Rifle. Its trademark ability is being able to apply the Jarate effect on scoped shots, with the duration scaled from 2 to 5 seconds depending on the charge. The only downside of the Sydney Sleeper is its inability to deliver deadly Critical Headshots of 150-450 damage; it also cannot deliver random Critical hits, as indicated in the weapon's description, though this downside is already present with the Sniper Rifle. Despite the lack of conventional Headshots, the Sydney Sleeper can still perform pseudo-Headshots (registered for Achievement purposes and Scoring systems as Bodyshots), with Mini-Crit damage being applied instead. These pseudo-Headshots can reduce the recharge time of Jarate (secondary weapon) if it is equipped. The Sydney Sleeper charges up scoped shots 25% quicker than the Sniper Rifle. Like Jarate, body shots will douse flames on teammates (you cannot douse yourself, however); this is intended for when the weapon is scoped, but this sometimes works when it is unscoped.

The Bazaar Bargain is a craftable Sniper Rifle for the Sniper. It starts out with a 50% slower charge rate when scoped-in. A headshot kill caused by the Bazaar Bargain will increase the charge rate by 25%, maxing out at 200% of the normal charge rate. This is represented by a "Head" counter on the HUD, with one head equaling +25% charge. Six consecutive headshots are needed to achieve the maximum charge rate.

The Machina is a craftable primary weapon for the Sniper. While scoped at full charge, it deals 15% more damage and can pierce through multiple targets, but at the cost of generating considerably more noise per shot, being unable to fire un-scoped, and leaving a highly-distinctive team-colored tracer behind the shot.

The Hitman's Heatmaker, like the Bazaar Bargain, comes with a meter that increases with each kill; in this case, each assist fills the "focus" bar by 11%, and every kill by 33%. Upon filling the bar, the rifle's charge rate increases by 25% and the player does not unscope, but the rifle temporarily fires tracer rounds. Additionally, the rifle is capped at 80% body-shot damage, limiting one-hit kills to headshots.

The Classic is a craftable primary weapon for the Sniper. The Classic will allow the player to charge their shot without having to zoom in, but the player will have decreased movement speed. It is only capable of getting headshots when fully charged, and deals 10% less damage on bodyshots. Unlike other rifles, the Classic is charged by holding down the fire key, and releasing to fire the shot. The Classic also allows the ability to fire multiple shots without leaving the scope. 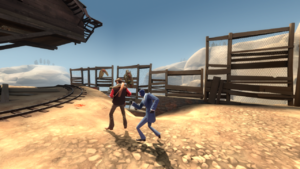 A Razorback breaks after one successful backstab.

The Darwin's Danger Shield shield renders you immune to afterburn and halves the damage taken from fire.

Any attack with the Bushwacka that would be a Mini-Crit will become a full Critical Hit. However, the Sniper will take 20% more damage while the Bushwacka is active.

Cooperating with a Scout is a bit unorthodox due to your completely different fighting styles, but there is still some chemistry to be found with a friendly Scout.

The Soldier is a bulky class that can provide excellent protection for you. While there isn't a whole lot you can do to make the Soldier's job easier, there are still some tactical situations to keep in mind.

A Pyro can effectively eliminate your risk of getting backstabbed due to its' excellent Spy-checking ability, allowing you to snipe without having to constantly watch your back.

Like the Soldier, the Demoman is a bulky class that can protect you with his explosive ordnance.

Eliminating enemy Snipers is of utmost importance when supporting a friendly Heavy. The Heavy is a slow class with a large hitbox, making him a juicy target for a Sniper. This is especially true when the Heavy is using the Brass Beast.

While working with an Engineer may not be overly effective, you can still help him keep his Sentry nest maintained.

Protecting your Medic from the enemy Snipers or other similar threats should be your first priority at all times.

Two Snipers working together is extremely hazardous to the enemy team, as they will constantly have to avoid open areas, limiting their effectiveness.

You and the Spy fulfill a very similar role, albeit in a different fashion. Cooperating with a Spy can maximize the effectiveness of this role and instill fear and paranoia on the enemy team.

Priorities vary and depend on the situation at the time. The following list should often, but not always, be used in order to specify which target is the first to take down. But if there is an easier shot to take, you should take the time to kill that target first. For example, if you have a large number of teammates battling a nearby Medic with a Heavy, sometimes taking out the Heavy first is the better choice since your teammates will be able to quickly control the area and kill the isolated Medic. If you shoot the Medic first, the Heavy might hold his ground by himself long enough for reinforcements to arrive, but it will only prevent them from using an ÜberCharge.

In order of priority, you should be taking out:

The rest in relative priority order: