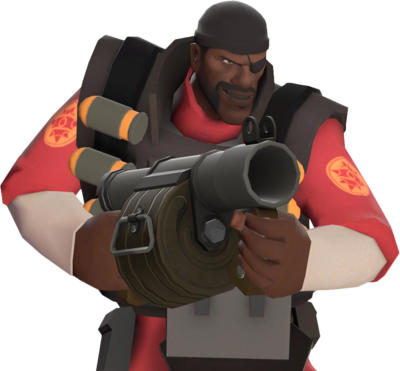 The Demoman is a medium-ranged, projectile-heavy class with an outstanding damage output, capable at both offensive and defensive support. While inaccurate at range and often threatened by self-damage at point-blank, the Demoman is one of the few classes able to attack without a line of sight to their target, allowing him to utilize his Grenade or Sticky Launchers for crowd control on the offensive, or area denial via Stickybomb traps on the defensive. His playstyle can change completely with access to a sword and shield, making the Demoman a fearsome melee class courtesy of his long melee range and the ability to perform charged dashes. Like the Soldier, the Demoman is also capable of performing explosive jumps, and can reach objectives well in advance of other classes once the jumps have been mastered. The Demoman is a rewarding class to learn but challenging and difficult to master, and is an ideal class for players oriented towards protecting objectives or eliminating multiple enemies.

Defense is the traditional role a Demoman will play, and is well suited to the class.

For a Defense-based class, the Demoman has one of the highest damage outputs in the game, allowing him to fill in the offensive role and punch through enemy defenses, letting his entire team move forward.

A Demoknight set completely changes the playstyle of the class.

Using a Demoknight set (generally seen as one of the shield weapons paired with a sword-based melee weapon) grants the Demoman a unique combat style that requires separate tactics and techniques.

]]. You can provide some extra firepower at the cost of 25 health.

The Demoman, along with the Soldier, is one of the two classes who can perform explosive jumps. His various weapons, including the Grenade Launcher, Stickybomb Launcher, and Scottish Resistance, can be used to perform such jumps, each with different methods to execute.

Stickybomb jumping, or sticky jumping, is often the most common type of Demoman jump, which involves the detonation of one or more stickybombs for a large, though highly damaging, explosive jump.

Similarly to the Beggar's Bazooka, the Loose Cannon can be overloaded. By charging a cannonball for a full second, the detonation allows for a strong, easily-timed explosive jump.

Charge jumps, while technically not an "explosive jump", is a unique Demoman jump which uses slanted objects to alter the trajectory of a shield charge.

The Tide Turner's full turning mobility allows for a charge jump known as Trimping, and is especially useful for Boots-wearing Demoknights with no access to explosive jumps.

The Loch-n-Load is a craftable primary weapon for the Demoman. It fires grenades that are 25% faster than grenades from the stock Grenade Launcher, and deal 20% more damage to Buildings. As a downside, the Loch-n-Load carries one less grenade in its clip (3 instead of 4), while its grenades have a 25% smaller splash radius and shatter harmlessly on contact with the world.

The Ali Baba's Wee Booties/Bootlegger is a passive primary weapon that gives the Demoman 25 extra health at the cost of losing his Grenade Launcher. Used in conjunction with either the Chargin' Targe, the Splendid Screen, or the Tide Turner and a Melee weapon, you can become a melee-based offensive powerhouse; you gain 200% more charge turning control (triple), 25% charge meter restored on a melee kill, and 10% increased movement speed. This comes at the cost of all of your ranged weapons.

The Loose Cannon is a Grenade Launcher whose damage is dealt as a 25-50 damage Direct Hit and a 60 damage explosion that occurs soon afterward (instead of as a 100 damage Direct Hit). The cannonballs launched by the Loose Cannon explode in a maximum of 1 second (instead of 2.3) and can be charged to explode even earlier. The cannonballs also feature a 20% faster projectile speed, immense Knockback, and the ability to Double Donk foes; if the Direct Hit and explosion occur within half-a-second of each other, the explosion will be a mini-crit.

The B.A.S.E. Jumper is a craftable primary weapon for the Demoman. When Demoman is in mid-air, he can activate it by pressing the jump key (default key: Spacebar) to activate a parachute, slowing and capping his vertical descent and allowing him to better control his ability to strafe. Pressing the jump key again will deactivate the parachute, allowing the Demoman to fall normally. Players can attack with any of their weapons while the parachute is deployed.

The Iron Bomber is an odd Grenade Launcher, with upsides that aren't as straightforward as a damage booster or projectile speed booster. Instead, it features the unique ability of grenade rollers that don't move around much (they are still affected by gravity). It also secondarily features a 30% faster fuse for its grenades (1.4 seconds), at the cost of a 15% smaller splash range (except for the Demoman who fired it).

The Stickybomb is one of the defining features of Demoman play. Stickybombs are detonated by using your alternative fire (default key Mouse2), no matter which weapon is currently out.

Some basic pointers for planting Stickybombs are:

The Chargin' Targe is an unlockable secondary for the Demoman that allows him to charge forward at breakneck speed for a short amount of time (max is around 2 seconds). This charge is indicated on a meter; as you use it, it quickly depletes, changing color from white to green to red. When the charge meter is red, the melee weapon that is currently equipped will perform a guaranteed critical hit. This charge meter recharges in around 12 seconds. The Chargin' Targe also features the ability to remove debuffs with its charge, and it gives the Demoman 50% resistance to fire and 30% resistance to explosives. The main drawback of the Chargin' Targe is that it replaces the Stickybomb Launcher. It also has minor advantages and disadvantages when compared to the other two shields, the Splendid Screen and Tide Turner.

The Scottish Resistance is an unlockable Stickybomb Launcher that is intended primarily for defensive play. It allows you to place 6 more bombs at a time (14), and it gives you 50% more reserve ammunition (36). It also only detonates stickybombs that are directly under the crosshair or directly under you. It allows you to see your own stickybombs through walls, and all of your stickybombs glow. Other abilities it has include a 25% faster fire rate and the ability to destroy enemy sticky bombs. The downside to using this weapon is a 0.8-second increase in bomb arm time.

The Sticky Jumper is a craftable sticky launcher that allows you to create Stickbombs that deal no damage, allowing you to jump without losing health. Though it is very useful for practicing Sticky jumping, there are also some situational uses in real matches.

The Demoman's Melee weapon, a Bottle of Scrumpy, is valuable as an emergency fall-back, and is the only type of weapon you can use in close-combat without injuring yourself.

The Eyelander is an unlockable melee weapon that gives you extended melee range, and also allows you to become stronger with each melee kill you earn. It has the downside of -25 base health.

The Pain Train is a craftable melee weapon that enables you to cap points twice as fast, at the cost of 10% increased bullet vulnerability.

The Scotsman's Skullcutter is a craftable melee weapon that increases the Demoman's melee damage and range at the cost of movement speed. Unlike most other non-stock melee weapons for the Demoman, the Skullcutter can inflict crits randomly.

The Ullapool Caber is a melee weapon that explodes on contact with an enemy or the world. The downside of this effect is a large amount of self damage and the inability to explode again, unless you visit a Resupply locker.

The Claidheamh Mòr is a sword melee weapon that refills 25% of your charge meter upon scoring a kill. This is at the cost of a 15% damage vulnerability while active and no random critical hits. The sword will grant a .5 second longer charge duration to all shields.

The Half-Zatoichi is a sword melee weapon that restores 50% of the Demoman's max health on kill and is capable of overhealing. The Half-Zatoichi can be holstered with no penalty if a kill has been scored, but will inflict 50 damage if it has not done so. If the player is below 50 health points, the weapon can not be holstered until the player gets a kill. Random critical hits are impossible to achieve with this sword.

The Persian Persuader is a melee weapon for the Demoman that allows him to use ammo packs as a source for shield charge and gains 20% charge with every hit landed with the weapon. However, he is incapable of regaining ammo if the charge meter is not full; also, both primary and secondary weapons will have their maximum amount of ammo carried decreased by 80%.

As one of the best burst damage classes in the game, a pair of Demomen will be able to take out almost any enemy formation.

Demomen and Engineers are two of the best defensive classes in the game. Together, they can create a nigh-imprenetrable defense.

Demomen and Snipers don't have much synergy, but they can do some work together.

As with Snipers, Demomen and Spies don't have 'much' synergy, but there is some to be had.