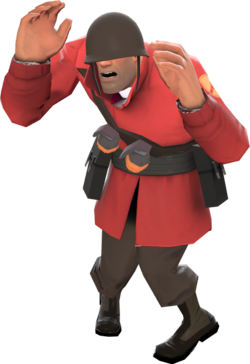 The Soldier is a well-rounded, bulky class that is capable of both taking and dealing solid damage. While slow on foot, the Soldier is known for his trademark ability to rocket jump, which allows him to quickly maneuver around a map. He is most effective at medium range or on high ground, where he can use the powerful splash damage from his rockets to reliably dispatch foes. The Soldier has a number of different loadout options that, according to the situation, allow him to increase his offense, defense, or support options, making him extremely versatile. Although he lacks many exploitable weaknesses, the Soldier is not the master of any one trade; for example, the Scout is faster while the Demoman and Heavy can deal more damage.

A Soldier's banners provide a 10-second area-of-effect buff to himself and nearby allies once he has dealt enough damage. The Soldier's teammates must remain close to him, so weapons with splash damage are effective for fighting a wave of buffed enemies. Killing the Soldier will end the effect immediately; if possible, aim for him first. Additionally, a Soldier using a banner lacks a secondary weapon; any class that can negate his rockets, such as the Pyro, can prevent him from charging his banner.