From Team Fortress Wiki
Jump to: navigation, search
This page contains basic strategy for the Spy. For more advanced strategies, see Community Spy strategy. For how to play against the Spy, see Anti-Spy strategy. 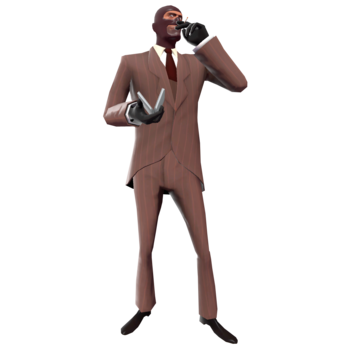 The Spy specializes in deception and excels at punishing mistakes made by the enemy team. He is the best choice for business behind enemy lines but not direct combat, as he is fragile and has some of the game's weakest weapons. His Cloaking and disguises allow him to sneak past undetected, where he can then cause havoc. He can approach targets from behind and backstab them for an instant kill, or sap Engineer buildings to cripple enemy defenses. Additionally, he can see enemy health levels to determine if a foe is weak enough to be picked off with his Revolver. Because of the fear he imposes, enemies will frequently Spy-check their teammates. Although the Spy can hide and blend in, he can easily be exposed through various methods, including the Pyro's flames or Sniper's Jarate. Through guile and precision, a good Spy can cause paranoia among the enemy while eliminating important targets that just won't fall to a direct attack.

Although the Revolver is weaker than primary weapons used by other classes, it is accurate and deals decent damage at medium range. It's best used to pick off weakened enemies or as a last resort should you be discovered; three close range shots is enough to take down fragile classes. There are several situations where you'll want to use the Revolver instead of the Knife, such as when your backstab fails, you cannot safely approach a target, or when a Sniper has a Razorback equipped.

The Ambassador comes with small penalties in damage and firing rate, but has the ability to headshot nearby enemies for up to 102 damage. When behind enemy lines, view enemy health levels and decide which targets you can take out with a headshot. There is a set period after firing where the Ambassador cannot headshot, so space your shots out instead of firing rapidly. One headshot and one bodyshot is enough to take out any of the frailer classes, particularly Snipers who insist on standing still, have their back against a wall, or have the Razorback equipped.

The L'Etranger primarily increases your Cloak duration by 40%, making it easier to maneuver behind enemy lines. While it deals reduced damage, it slightly refills your Cloak whenever you shoot an enemy, converting firepower into potential fleeing power. It can be used to safely refill your Cloak from a distance and pairs well with the Dead Ringer, which requires a full Cloak meter to activate.

The Enforcer deals 20% extra damage when attacking while disguised, but has a 20% slower firing speed. This makes it useful for ambushes and fighting back if you're discovered, but not for direct fights. Attacking breaks your disguise, so the bonus only applies to your first shot. Hence, don't miss your first shot and only strike when you're sure the first few bullets will be enough. The Enforcer also ignores any defensive bonuses, making it particularly deadly against cloaked Spies or Medics using the Vaccinator.

The Diamondback deals reduced damage but grants guaranteed critical hits upon the destruction of a sapped building or a backstab. This makes the weapon effective for escaping after a successful strike; view enemy health to determine who can be picked off on the way out. You will still receive critical hits even if the building destruction isn't credited to your Sapper, so work alongside your allies. If an Engineer is guarding his buildings, disable the Sentry Gun and run interference while your teammates destroy it.

The Knife is typically used to backstab targets and deals pitiful damage otherwise. To get into position for a backstab, use your Cloak and disguises to maneuver behind your enemies without drawing attention. If your backstab attempt is unsuccessful, switch to your Revolver or attempt to trick an enemy into showing his back; a common ruse would be to flee up a flight of stairs, then jump above and behind your pursuing foe.

Your Eternal Reward makes your backstabs much more difficult for the enemy to track. Upon a successful backstab, your victim will silently disappear as you instantly disguise as them. No death notice appears to the enemy team and further backstabs will not break your new disguise, particularly useful for taking out an Engineer and his buildings. Although backstabs don't appear in the kill feed, don't rely on this "silent killer" aspect; dead enemies can communicate using text or voice chat. Using the Disguise Kit with the Eternal Reward requires and consumes a full Cloak meter. Outside of your spawn room, you need to keep track of where ammo pickups spawn or get used to working without either your Cloak or disguise. If you're stuck with a slow disguise, you can Cloak to move at normal walking speed.

The Conniver's Kunai allows you to steal the health of your victim and eliminate any negative status effects upon a successful backstab. You can use the stolen health, which can overheal your health up to 210, to safely escape enemies. However, the weapon reduces your initial health to 70, so you can be killed by a single stray projectile. The Dead Ringer can be used alongside the Conniver's Kunai for some initial survivability before you get your first backstab.

When you kill an enemy with the Big Earner, your Cloak will be refilled by 30% and you will gain a speed boost, regardless of any restrictions for the Cloaking device you are using. However, it comes with a moderate health reduction which allows for stronger weapons like the Soldier's Rocket Launcher to kill you in one shot. Overall, you'll have a smaller margin of error when behind enemy lines but can escape more easily with your Cloak once you kill an enemy.

The Spy-cicle will melt if you have it as your active weapon while on fire, temporarily disabling its use but protecting you from all fire damage for 1 second and from afterburn for 10 seconds. This gives you some protection against the routine Spy-checks made by enemy Pyros and allows you to extinguish yourself by changing weapons. However, this same feature allows Pyros to prevent you from backstabbing their teammates with a simple puff of flame if you're discovered; be prepared to compensate with your Revolver. Additionally, victims of the Spy-cicle turn into ice statues, making it far more obvious where you have been. Keep an eye out for ammo pickups, which also recharge this weapon in addition to your Cloak.

The Disguise Kit is one of your major infiltration tools. If near allies, it's best to disguise as another friendly class or an enemy Spy so you won't raise suspicion if seen by an enemy. When choosing a new disguise, you will be briefly immersed in a cloud of team-colored smoke, so only disguise while out of enemy vision or cloaked. The Disguise Kit takes one second to activate, so avoid the common mistake of approaching an enemy before the change is complete. Once behind enemy lines, try to not behave like a Spy; for example, reloading your Revolver while disguised will mimic your disguise's reload animation, allowing you to better blend into an enemy crowd. Additionally, don't linger in front of enemies for too long, as you are still vulnerable to Spy-checking. Attacking will cause your disguise to disappear, so find a safe place to redisguise afterwards.

Out of all your watches, the Invisibility Watch has the quietest decloaking sound and allows you to cover the farthest distance while invisible. However, its limited Cloak meter and delayed activation time give you the smallest margin of error to work with when in enemy territory. While you receive 20% less damage when cloaked, this does not make you invincible. To keep your Cloak filled and ready for emergencies, deactivate it when in safe areas and frequently grab metal pickups and ammo boxes from dead players. Upon seeing an ammo box disappear, competent enemies may Spy-check the area. If in enemy territory, always stay on the move to decrease the chances of being detected or cornered.

As long as you remain still, the Cloak and Dagger can be used to remain invisible indefinitely, allowing you to camp an area to pick off important targets such as enemy Medics. Its meter drains based on your average movement speed; traveling the same distance will drain a certain amount of Cloak, regardless of whether you move steadily or in quick bursts. The Cloak and Dagger will only refill Cloak from metal or ammo pickups if you are uncloaked, so you may have to put yourself at risk to get a Cloak refill. The Cloak and Dagger's decloaking sound, while quiet, is distinct and noticeable, so refrain from decloaking within the range of any enemies. Continue to be mobile, even when remaining in one area; enemies will be encouraged to Spy-check if you stay in the same place too long. Likewise, don't just use the Cloak and Dagger to stay out of harm's way; being alive doesn't necessarily mean being useful.

While you cannot manually Cloak with the Dead Ringer active, it will instantly Cloak you upon taking any type of damage. This also produces a fake corpse and displays a fake kill notification to the enemy team. Upon Cloaking, you take reduced damage, gain afterburn immunity and a speed boost for 3 seconds, but can still be revealed by effects such as fire, bleeding, or Jarate. The Dead Ringer has an extremely loud decloaking sound, so use your feigned death to find a safe location before going about your Spy business. Simply "dying" from fall damage is a sure sign that you're a Spy. To make your feign death more convincing, consider disguising as an ally or letting the enemy damage you for a bit before taking out the Dead Ringer, giving them a false sense of security as you change disguises. The Dead Ringer cannot be refilled with ammo pickups; if you struggle with managing your Cloak, try also using the L'Etranger or Big Earner, weapons that help refill it.

The Sapper will instantly disable an Engineer's building, destroying it over time. It can only be removed by the Engineer's Wrench or the Pyro's Homewrecker or Neon Annihilator. You have an unlimited supply and can place them faster than the Engineer can remove them. Typically, you'll first backstab an Engineer, then quickly sap any nearby buildings; you'll want to begin with Sentry Guns to prevent them from attacking you. You can further attack a building to speed up its destruction, although at reduced damage.

The Red-Tape Recorder can reverse the construction of Engineer buildings. When compared to the standard Sapper, it takes significantly longer to destroy any Engineer building. However, it takes a very short amount of time to downgrade buildings to their level one version. If you're having trouble dismantling a guarded Engineer nest, use the Red-Tape Recorder to weaken instead of destroy it and allow teammates to clean up.