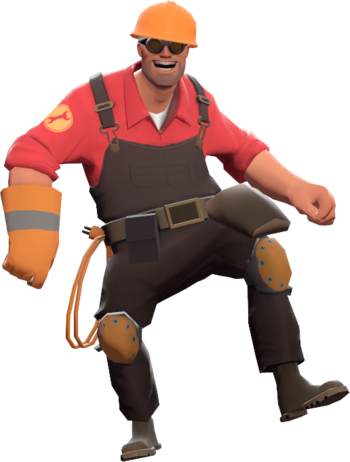 The Engineer has the unique ability to construct Buildings. His Sentry Gun compensates for his weaker weapons and fragility, providing more than enough firepower at the front lines in his stead. His Teleporter system transports teammates around the map, while his Dispenser heals and supplies ammunition. After constructing a building, he can pick up and haul it to a new location, allowing him to keep his base as his team advances or retreats. The Engineer and his buildings will frequently be targeted by Soldiers, Demomen, and Spies. A well-timed enemy ÜberCharge, in particular, can quickly ruin all of his hard work. When his buildings are destroyed, it is most important that the Engineer makes it out alive so that he can reconstruct his base. A good Engineer will place his buildings in strategic locations and not be afraid to get his hands dirty defending them.

The Shotgun is effective at close to medium range, but much weaker at a distance. Use it to defend yourself when alone and scare off enemies that your Sentry Gun cannot target, such as disguised Spies. The Shotgun is the most reliable choice for fighting independently from your Sentry Gun or team - your other primary weapons sacrifice the Shotgun's consistency for situational damage or utility.

The Widowmaker consumes 30 metal per shot, refunds metal based on damage dealt, and deals increased damage to enemies targeted by your Sentry Gun. When using the Widowmaker, fight near your buildings and aim each shot - an accurate close range shot will yield more than the 30 metal it costs. The Widowmaker can be used alongside the standard Sentry Gun to take out attacking enemies faster, or alongside the Combat Mini-Sentry Gun for powerful dueling. Just in case you run out of metal, know where your Dispenser and metal pickups are, and carry the Pistol for backup.

The Pomson 6000 is a weak weapon with slow projectiles, but its projectiles drain the ÜberCharge or Cloak meters of enemy Medics and Spies, class-specific abilities that are effective against your Sentry Gun. The amount of charge lost depends on distance, with none lost at longer ranges; if you are willing to risk combat, you can stall an enemy Medic from obtaining the invincibility-granting ÜberCharge that would overpower your Sentry Gun, or make a Spy's escape that much more difficult.

The Rescue Ranger shoots weak bolts that can heal friendly buildings from afar at a 4-to-1 health-to-metal ratio, with a maximum of 60 health per shot. This is slightly cheaper than using the Wrench, which repairs at a 3-to-1 ratio, but does not restore ammo, remove Sappers, or upgrade buildings. Use the Rescue Ranger to support your Sentry Gun from safety so long as you still get up close to reload it or deal with Spies.

The Rescue Ranger can also haul your buildings from afar at the cost of 100 metal. This requires a direct line of sight, shows a visible tracer, and marks you for death; you can move buildings across open areas, but are discouraged from sneaking into the enemy base. Use this ability to save your Sentry Gun, especially if you see enemy Stickybombs or an ÜberCharge. This mobility pairs well with the Jag, which aids in redeploying hauled buildings.

The Panic Attack deploys 50% faster than the Shotgun, making it useful for a few panicked shots against a surprise attacker. However, the pellet spread widely increases as you fire consecutively, making it far less effective in prolonged combat. Unlike with the other classes, the Panic Attack replaces your primary weapon. Stay away from the main melee unless you have your Pistol or can flank a nearby attacker.

The Pistol is an effective backup weapon at medium range, especially if you choose any primary weapon other than the Shotgun. You have a tremendous supply of Pistol bullets, so feel free to spam them to fend off enemies or check for Spies.

When the Wrangler is your active weapon, your Sentry Gun gains a damage-reducing shield and can be aimed manually. While the Sentry Gun is under your control, it fires more rapidly and turns quickly, but you must do all the aiming. Use the Wrangler to attack enemies outside your Sentry Gun's normal range, siege an area, or destroy Stickybombs. Although the Wrangler grants your Sentry Gun protection, you will usually need to expose yourself to aim; like when using other weapons, duck in and out of cover to avoid being picked off. Deactivating the Wrangler will disable your Sentry Gun for 3 seconds, so you need to balance its activation with building repairs. If you need to focus on something else, don't be afraid to allow your Sentry Gun to function normally.

The Wrench is not just a weapon; hitting buildings with your Wrench will cause them to build twice as fast. Hitting a pre-constructed building you hauled speeds up reconstruction, so it's possible to build and upgrade while at spawn before hauling your buildings into position. If a Spy places a Sapper to disable a building, two hits from your Wrench will remove it. Disabled Sentry Guns take 0.5 second to reactivate after having a Sapper removed, so first take care of the Spy if he hangs around. The game prioritizes repairing and upgrading buildings over melee combat, making it possible to accidentally hit your buildings instead of an enemy; use your Shotgun to dispatch nearby enemies instead.

The Gunslinger grants you 25 additional health points and replaces your Sentry Gun with a cheap, rapidly constructed, but weaker Combat Mini-Sentry Gun. The Gunslinger is great when constructing a full Sentry Gun can be inefficient, such as when you're on the offensive, in the middle of combat, or moving around too often. If you're staying at medium range, support your Mini-Sentry Gun with the Pistol or Wrangler. For a more aggressive playstyle, use the Shotgun or Widowmaker; the Shotgun needs to be reloaded less frequently while a few well-aimed shots with the Widowmaker will give you enough metal to build another Mini-Sentry. The Gunslinger can deal a guaranteed Critical hit upon landing three successful consecutive punches, but using a loaded Shotgun at close range is less risky.

The Southern Hospitality grants a bleed effect on hit, but deals no random critical hits and increases your vulnerability to fire. The bleed effect inflicted can be useful in a one-on-one fight and helps to track down Cloaked Spies. The fire vulnerability makes escaping from enemy Pyros more difficult, so consider having a friendly Pyro nearby who can extinguish you.

Hitting buildings with the Jag, which has increased construction and swing speed, causes them to build even faster than when using the Wrench. This makes the Jag effective for immediately constructing a Sentry Gun or redeploying buildings as your team moves around. However, the Jag has a reduced repair rate, deals less damage, and takes three hits to destroy Sappers, making defense against a constant assault or Spies much more difficult.

The Eureka Effect focuses on teleporting. It reduces the cost of constructing and upgrading Teleporters, and allows you to use the reload button to teleport to your spawn room and Teleporter Exit. Use nearby ammo pickups to make your Level 1 buildings, then teleport to base to quickly restock. The teleport itself is useful for defending your buildings if they're under attack, or retreating if you're in danger. Although you cannot teleport while hauling a building, you can sneak a Teleporter Exit behind enemy lines to build a nest in their territory. Overall, the Eureka Effect makes it easier to construct an initial base but weakens your in-battle repairs - hitting buildings does not speed up construction as quickly and all metal gained from pickups is reduced by 20%.

You are most valued for your Buildings, which all considerably impact a battle. It takes time to fully set up a base, which means you need to choose certain buildings to prioritize. The Sentry Gun provides most of your firepower, so fully upgrade it first in most situations. If your teammates can hold the line without the aid of your Sentry Gun, upgrade your Dispenser or Teleporter system first. Additionally, spread your buildings out so that not all of them can be damaged by a single explosive from the Soldier or Demoman. If any building is in danger of being destroyed, you can haul it away; it's sometimes more important to save an upgraded Sentry Gun than to stall your enemies.

The Sentry Gun automatically detects and fires at enemies within its radius, making you the best class for area denial. It's best to place Sentry Guns in well-frequented areas to prevent enemies from passing, hauling and repositioning it as needed to support your team. As soon as possible, secure a stable source of metal from either a Dispenser or ammo spawn to upgrade your Sentry Gun and improve its firepower. Consider the power of your Sentry Gun and what it can comfortably fight, depending on where you placed it. If a Sentry Gun is placed out in the open, it covers more ground but is more vulnerable to attackers. If placed in a corner, it is protected from flanking by walls, but only focuses on certain angles. Precise placement of your Sentry Gun can be very rewarding; a few inches can keep it from being picked off by Soldiers or Snipers. Compensate for what the Sentry cannot detect with your Shotgun, especially enemy Spies.

Combat Mini-Sentry Guns build quickly and only cost 100 metal, but have reduced firepower and can't be upgraded. When combined with the Gunslinger's bonus health, you can be far more aggressive and enter combat more often when compared to the defensive playstyle the default Sentry Gun promotes. At the front line, place them alongside teammates to provide constant support, forcing your opponents to choose between targets. Alternatively, place them slightly further back to protect allies like your friendly Medic from ambushers. No matter where you place them, speed up their construction with your Wrench, supplement their damage with your Shotgun, and always have one active.

A Dispenser is typically the first building you want to construct so that you have a stable source of metal, as a Dispenser has the potential to dispense unlimited health and ammo. It takes a very long time for a Dispenser to build, even with the help of your Wrench, so consider placing it in a safe location to let it build by itself while you focus on setting up your other buildings. Placing Dispensers in forward locations will keep teammates healthy and allow them to hold an area for a longer period of time. Additionally, because the Dispenser is a solid object, you can hop on your own Dispenser to climb to inaccessible places or block narrow passages from enemy Spies.

Depending on the map, the Teleporter might be your most powerful building. Your Teleporter system lets reinforcements skip an excruciatingly long walk so your team can build up a large enough push, especially when attacking the last point on Attack/Defend or Payload, or defend against unrelenting pressure. The Teleporter system is also effective for shepherding your team towards your buildings or alternate routes. Always keep a Teleporter system active, even if the distance covered is short.

The Teleporter system has a few important mechanics. The Entrance and Exit are linked - they share repairs and upgrades via your Wrench, and downgrade via destruction. As you leave spawn, drop a Teleporter Entrance so it will build itself and link to your Exit later. Place the Teleporter Exit behind cover and rotate it to face away from walls so teammates can see the battlefield immediately upon coming through. Try to keep the Teleporter System at least at level 2, as level 1 Teleporters usually have too long of a recharge to be worth the wait. If you are guarding your buildings, refrain from standing on your Teleporter Exit, as enemy Spies can come through and telefrag you.