From Team Fortress Wiki
Jump to: navigation, search
This page contains basic strategy for the Medic. For more advanced strategies, see Community Medic strategy. For how to play against the Medic, see Anti-Medic strategy. 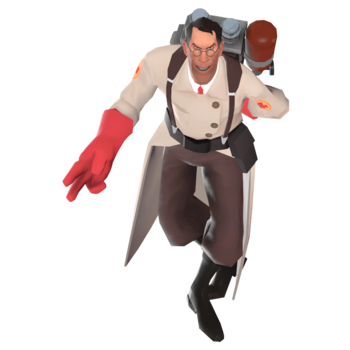 The Medic is arguably the most important class. He is the only class with a reliable way to heal and overheal, putting any team without one at a severe disadvantage. As the Medic heals others, he builds an ÜberCharge meter. Once this meter is full, he can buff a teammate with effects such as the Medi Gun's invulnerability or the Kritzkrieg's Crit-boost, giving his team a chance to forge ahead. However, if the Medic dies, he loses his accumulated ÜberCharge. Knowing this, the flow of battle can be dictated by if a team's Medic is alive and/or charged. The Medic is a priority, both for his team to protect and the enemy to kill.

The Medic's weapons are designed more for self-protection and supplemental healing. He relies on having competent teammates who will protect him so that he is free to heal, not fight. More than with any other class, communication is key, both for indicating who to heal and when to activate an ÜberCharge.

Your ability to heal teammates will often make you the primary target of many enemy players. When in combat, be hard to hit: jump, duck, and strafe to avoid damage. Your natural health regeneration will often not be enough to keep you alive, so rely on your allies for protection and ask them to leave health pickups for you. Unless you are forced to fight, you should retreat if all nearby teammates are defeated.

The Syringe Gun rapidly fires needles in a slow parabolic arc, which deal moderate damage at close range only. It is not a great weapon - your teammates should protect you so that you don't have to use it. The Syringe Gun should be used as a last resort when enemies directly attack you; aim slightly upward and lead targets accordingly to compensate for the slow projectile speed.

The Blutsauger heals you for 3 health for each shot that hits an enemy, but lowers your natural health regeneration even when it's not your active weapon. The lifesteal effect is useful in a direct fight, usually when you are caught out alone and need to find teammates or a health kit. If your team reliably protects you from enemies, equip a different weapon to retain your natural regeneration.

The Crusader's Crossbow is your only primary weapon that can heal, at a distance further than the Medi Gun, no less! Depending on who you hit, crossbow bolts either damage enemies or heal allies, with shot power increasing the farther it travels. The Crossbow's most common application is to heal teammates that are far away from you, such as roaming Scouts, Soldiers, and Spies; you can tell your allies to stand still if you have trouble landing long-range healing shots. For nearby injured teammates, shoot them with the Crossbow for burst healing before swapping to your Medi Gun. Overall, you gain an extra healing ability in exchange for self-defense; the Crossbow's slow fire rate makes it unreliable in a fight.

Depending on how full your ÜberCharge meter is, the Overdose grants up to 20% additional movement speed. This weapon makes it easier to dodge projectiles or flee from enemies if you're under attack. In particular, the extra speed increases the odds that you won't have to waste your ÜberCharge in self-defense. The movement speed bonus only applies when the Overdose is your active weapon, so healing teammates will return you to normal speed. The Overdose deals slightly less damage in combat, encouraging you to seek help from teammates to preserve ÜberCharge instead of fighting enemies. The maximum speed bonus is still not enough to outrun an aggressive Scout, so you may still need to turn and fight regardless.

You cannot heal yourself, so you will want to work with your team. To heal an ally, target them with your Medi Gun out and fire away. You can only heal one teammate at a time, so you will sometimes need to decide who takes priority:

As you heal allies, the ÜberCharge meter will gradually fill up. It fills more quickly if you are healing wounded allies, rewarding you for staying near combat. Your different secondary weapons have different ÜberCharges; communicate with your team to best use your chosen effect.

Compared to your other choices, the standard Medi Gun charges the slowest but arguably has the most powerful ÜberCharge. It provides 8 seconds of invincibility to you and an ally, which is useful in almost any situation. Offensively, you can push into a defensive encampment, particularly those with chokepoints or Sentry Guns. Defensively, you can hold a contested area when outnumbered or counter an enemy Medic's ÜberCharge. If you are in danger of being killed, activate your ÜberCharge in self-defense: it's better to survive than to die with a full meter. You can keep multiple targets ÜberCharged at once by quickly switching your healing beam between them, at the cost of it draining significantly faster.

The Kritzkrieg functions similarly to the Medi Gun, but charges 25% faster and provides 8 seconds of guaranteed Critical hits to its target upon ÜberCharge instead of invulnerability. It promotes a riskier, offensive playstyle; if the enemy Medic uses the standard Medi Gun, you will be fully charged first and can quickly overwhelm his team. The Kritzkrieg's ÜberCharge does not protect you or your teammate, so it is best on the Soldier, Demoman, and Heavy, classes that deal ranged area damage. Unlike the Medi Gun, the Kritzkrieg is ineffective against the Engineer's Sentry Gun, as buildings are not affected by critical hits.

The Quick-Fix heals teammates the fastest of your secondary weapons, making it useful for healing multiple injured teammates during combat. You also copy the explosive jumps of a friendly Soldier or Demoman when healing them, allowing you to easily keep up with them. However, the Quick-Fix can only overheal allies to 125% of their max health rather than 150%. Your team will be at disadvantage at the beginning of fights, when your enemies are presumably fully overhealed.

The Quick-Fix's ÜberCharge triples the rate of healing, grants immunity to knockback, and charges 10% faster than the Medi Gun. It is best used to maintain momentum rather than protect an area; you can still be overpowered by the invincibility from an enemy Medic's Medi Gun ÜberCharge and sources of massive damage, such as crit boosts.

The Vaccinator is trickier to use than your other options. When healing an ally with the Vaccinator, you can cycle between granting the two of you a 10% resistance to either bullets, explosions, or fire. Its ÜberCharge, which builds 67% faster and is stored in 4 smaller bars, increases the chosen resistance to 75% for 2.5 seconds. The Vaccinator's defensive capabilities, combined with the reduced overheal rate, are best used to maintain an immediate advantage at the front lines. In fights, adjust the Vaccinator to face whatever weapons your enemies carry. For example, a Pyro can always deal fire damage, but may have a Shotgun, which deals bullet damage. The Vaccinator deploys each ÜberCharge as a shield; you can rapidly place shields on multiple teammates or stack them on the same target to protect against multiple damage types. Note that the Vaccinator's ÜberCharge rate is significantly reduced when healing targets at full health; stay near the action to heal injured teammates.

The Bonesaw is useful for striking distracted opponents but still loses to the Syringe Gun in damage over time. All of your other melee weapons possess some sort of utility and are generally seen as straight upgrades because Medics rarely engage in combat.

The Ubersaw swings slightly slower than the Bonesaw, but grants a massive 25% boost to your ÜberCharge meter for each attack that lands. If an enemy misjudges his ability to fight you, take him out with the Ubersaw for an instant advantage. If you are cornered, the Ubersaw can be used to quickly fill the Medi Gun's meter, then escape with the resulting invincibility. Try not to actively seek combat to build charge with the Ubersaw, as it leaves your team without a healer, not to mention that every class has access to a weapon that outranges your melee strikes.

The Vita-Saw grants minor ÜberCharge insurance. Hitting an enemy with it harvests an Organ; each Organ lets you retain 15% of your ÜberCharge upon dying, up to a cap of 60%. As a Medic, you will inevitably become a priority target for the enemy team. If your ÜberCharge is not fully charged and you are cornered, fight back with the Vita-Saw to ensure at least some of your hard work remains after death. Of course, the small -10 health penalty might mean you die more often against burst damage; offset this by equipping anything except the Blutsauger to maintain good health regeneration. The Vita-Saw is useless in situations where you cannot respawn, such as Arena or Sudden Death.

While you hold the Amputator, you regenerate 3 extra health per second, useful when escaping a fight or suffering from effects such as afterburn and bleeding. Taunting will play a melody that heals all nearby allies that are not obstructed by cover. This melody doesn't build much ÜberCharge and leaves you defenseless for four seconds, so play it only when you absolutely need to heal multiple teammates at once. The Amputator deals 20% less damage than the Bonesaw but is still considered an upgrade because as the Medic, you'll rarely engage in melee combat.

The Solemn Vow allows you to see enemy health, names, and ÜberCharge percentage, like how the Spy does when disguised. While you heal teammates, also spend time looking at the enemy - you can tell your team about weakened foes and the ÜberCharge state of enemy Medics. If you are alone, this ability helps you decide whether to fight or run from a pursuing enemy. The Solemn Vow suffers a 10% attack speed penalty, which is practically negligible for its benefits.