From Team Fortress Wiki
Jump to: navigation, search
This page contains basic strategy for the Heavy. For more advanced strategies, see Community Heavy strategy. For how to play against the Heavy, see Anti-Heavy strategy. 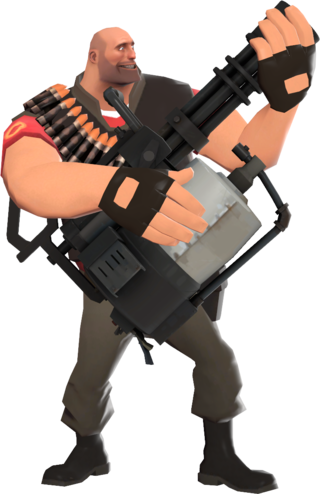 The Heavy is the toughest, but slowest class in the game. His vast firepower and health pool will almost ensure that he'll be found at the front lines as a shock trooper, where his Minigun dominates at close range. The Heavy acts as a beacon for his team to rally behind and is often a designated Medic buddy. However, his large size and slow speed make him a juicy target, especially for enemy Snipers or Spies, and his general loudness makes him subpar at ambushing. A good Heavy will coordinate with his team to tackle mission objectives together.

Think of the Minigun as a rapid-fire Shotgun; it can shred anyone at close range, but the wide bullet spread causes its damage to heavily fall off over distances. Although the Minigun possesses a lot of firepower, it has a moderate wind-up time and revving it brings your speed to a crawl. Thus, you'll either want to have it as your active weapon at all times or simply use a different weapon when moving between areas. You can rev it while in midair, allowing you to catch enemies by surprise as you jump around corners.

Natascha's bullets come with a unique slowdown effect that forces enemies to stop and face you in combat, making it the ideal counter to mobile Scouts, rocket-jumping Soldiers, and Demoknights. When Natascha is spun up and you drop below 50% health, you take 20% less damage, helping you win once you grab the enemy's attention. However, Natascha deals 25% less damage and is 30% slower to spin up, so enemies have extra time to attack you if you aren't already revved up. In particular, you are disadvantaged when facing an enemy Heavy with the normal Minigun, which revs up faster, or the Brass Beast, which by far outdamages Natascha. Consider equipping the Shotgun or Family Business for moving between fights.

The Brass Beast is the strongest weapon in the game in terms of damage per second, but has a 50% slower spin up time and slows you to a crawl when deployed. You need to play around the Brass Beast's long spin up time; if the weapon isn't already deployed, you are vulnerable to even frontal attacks. Once you do manage to spin it up, the weapon also grants 20% damage resistance if you're below 50% health. Thus, the Brass Beast is suitable for defensive situations where you need to move around less. Be very careful to not overexpose yourself, as your glacial movement speed makes you an even easier target for enemy Snipers and Spies.

The Tomislav has a faster spin-up time and revs up silently. The sound of your Minigun is a signal for the enemy to stay clear. However, the Tomislav's silent spin-up and superior accuracy makes it an excellent choice for ambushing enemies offensively or concealing your presence when guarding a location. However, the Tomislav fires 20% slower, causing it to deal far less damage in long battles despite the faster spin-up. Use the element of surprise to deal enough damage to your target before the Tomislav's firepower disadvantage becomes significant.

When revved up, the Huo-Long Heater continuously consumes ammunition to emit rings of fire around you. It is initially weaker than the default Minigun, but deals significantly increased damage against ignited enemies. The flame rings deter any opponent who wants to get inside your personal bubble, so it's a strong choice when enemies must approach you, such as when defending a Control Point. If enemies choose to run away instead, ammunition can become a problem, so consider staying closer to ammo pickups than usual. Don't rely on the flame rings to reveal surprise attacks, as a competent enemy can simply jump over the flames.

Although the Shotgun is a secondary weapon and weaker than the Minigun, it can still deal plenty of damage. Notably, it is one of your only guns that can be used while running. Use it when slowing down to fire your Minigun would be inefficient.

The Sandvich lets you replace a source of mobile firepower, the Shotgun, with the ability to fully heal yourself. Eating the Sandvich takes a long, loud four seconds, so make sure to begin your meal somewhere peaceful. It can also be thrown on the ground as a medium health kit to heal allies, especially helpful for any Medic you work with. Picking up any type of health kit when the Sandvich is consumed will instantly recharge it. Compared to other edibles, the long recharge time and higher ally healing makes the Sandvich best when working alongside teammates.

The Dalokohs Bar heals you for only 100 HP but recharges significantly faster than the Sandvich, making it useful for healing minor wounds in between fights. Additionally, it temporarily increases your maximum health by 50, providing a small advantage if used shortly before engaging in combat. However, it only heals for a small health pack if dropped for allies, and its reduced healing capabilities compared to the Sandvich means that you will have to stop to heal yourself more often. Standing near a Dispenser while using the Dalokohs Bar can compensate for its inability to fully heal you in one sitting, and the maximum health boost also slightly increases health gained from medkits.

Consuming the Buffalo Steak Sandvich does not heal you, but instead gives a special buff that temporarily locks you to your melee weapon while granting increased movement speed, guaranteed mini-crits, and increased damage vulnerability. If you seldom use your melee weapons, it is best used to move towards the frontlines quickly while your teammates keep you safe; consider also using the Fists of Steel to mitigate the increased damage from ranged attacks. If you prefer to use the buff to improve your melee combat, use the increased movement speed to avoid attacks and overpower opponents with mini-crits. Like the Sandvich, it can be thrown onto the ground to heal injured teammates.

The Family Business is a faster, weaker Shotgun with a larger clip size. While the Shotgun deals more damage per hit, and therefore takes less time to kill most classes, the Family Business's increased clip size makes it useful in a prolonged fight where you do not have many opportunities to reload. Its high rate of fire is also useful against classes like Scouts and Spies, whose low health pools make the weapon's damage penalty a non-issue.

The Panic Attack deploys 50% faster than the Shotgun, making it useful for a few panicked shots if you are caught off guard. However, the Panic Attack's pellet spread widely increases as you fire consecutively; make the first few shots count.

The Second Banana recharges quickly, in 11 seconds compared to the Sandvich's 30 seconds, but only heals for 200 health and drops to allies as a small health kit. It is ideal for a playstyle where you are frequently skirmishing, but also have enough breaks where you can heal your teammates or be protected by them as you eat.

If an enemy takes you by surprise at close range, it may still be worth it to just spin up your Minigun instead of switching to your Fists; you are slow and will probably be unable to get within melee range of your foe. Still, your large health pool does give you an advantage in a melee fight against single opponents.

Obtaining a kill with the Killing Gloves of Boxing will grant guaranteed critical hits for five seconds. You're as slow as ever, so use this weapon when you have an enemy cornered and can easily land your punches. Once you've obtained the critical hit boost, pick a weapon to rampage with or keep punching. The Tomislav has the fastest spin-up time of your primary weapons while the Panic Attack deploys quickly.

When active, the Gloves of Running Urgently (GRU) boost your movement speed to nearly that of other classes and drain your maximum health, which reduces both your current health and overheal. Your health can decay to as low as 100, but recovers when the GRU are not equipped. Use the speed boost to approach an objective, then consider if you can fight with lowered health, or should wait to recover. The GRU take 50% longer to holster, making the speed boost useful for travel and retreating, but not chasing. Combine the GRU with a fast-recharging lunchbox item like the Dalokohs Bar for a more self-sufficient playstyle.

The Fists of Steel make you very difficult to kill with ranged weaponry, but causes you to receive double damage from melee attacks. They are particularly useful when you need to cross through open areas or retreat from a firefight. You can also deploy them as you approach opponents while being protected by the weapon's ranged resistance. It takes significantly longer to switch away from the Fists of Steel, so preemptively switch to your Minigun if an enemy decides to attack you with his melee weapon; it's very possible for you to be killed before the Fists can be holstered.

The Warrior's Spirit causes you to deal and receive 30% more damage, allowing you to defeat certain enemies in two punches rather than three. This can also affect you; for example, you now can be killed in four melee attacks, rather than five. The 50 health restored on kill compensates for the increased damage taken, provided you win. You can use the Warrior's Spirit alongside the Buffalo Steak Sandvich to further amplify damage dealt and taken for a risky, mobile melee playstyle.

The Eviction Notice swings twice as fast as the Fists, grants 15% movement speed, and additional movement speed on-hit. However, it deals 60% less damage and slowly drains your maximum health by -5 per second. Although the increased attack speed does not fully make up for its reduced damage, landing melee attacks to gain additional speed lets you outrun any class but the Scout to actually keep up in melee combat. In combat, you can continue landing punches or switch to the Shotgun; avoid switching to the Minigun due to its long rev time. Outside of combat, the Eviction Notice can be used as a lower-risk version of the Gloves of Running Urgently, granting lower movement speed and draining less maximum health.

When using the Holiday Punch, critical hits or attacks from behind deal no damage but force opponents to laugh in place. Like the default Fists, the Holiday Punch is inefficient in standard combat due to your slow movement speed. If you do, however, catch a foe off-guard and force him to laugh, you can finish him off with almost any method of your choosing, including the Showdown taunt kill. Characters cannot be forced into animations unless they are grounded, so use a different weapon against a foe who insists on staying in the air or swimming in water.