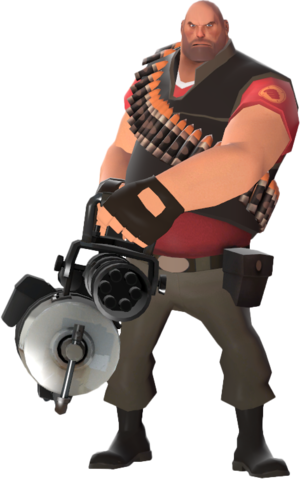 The Heavy, as the class name suggests, is the full frontal attack force of Team Fortress 2. His class itself is a heavy weapon — big, slow, tough, and powerful; players can wade into battles where other classes dare not. The Heavy's usefulness as a shock troop on the front lines, defense breaker, and wide-area defender should not be underestimated or ignored by either side. 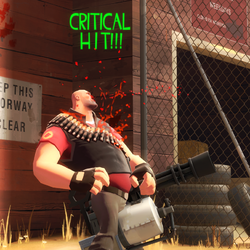 Each bullet fired by Natascha greatly slows hit enemies for a brief period of time, but slows enemies down less if they are further away. In addition, the weapon, similarly to the Brass Beast, grants 20% damage resistance when spun-up, but only if the player's health is below 50%. As downsides, Natascha's bullets are 25% weaker than those of the default Minigun and the weapon has a 30% increased spin-up time.

The Brass Beast is a craftable primary weapon for the Heavy. This weapon deals 20% more damage than the default Minigun and, like Natascha, it gives the Heavy 20% damage resistance while it is spun-up and the player is below 50% health (both conditions have to occur simultaneously for it to work). However, this comes at the cost of a 50% slower spin-up time and 60% slower movement speed compared to the default Minigun while it is spun-up.

The Tomislav is a craftable primary weapon for the Heavy. The weapon features a 20% faster spin-up time and 20% more accuracy than the default Minigun. It also features the "Silent Killer" effect of no maintained spin-up sound, though it still has a quiet jingling sound as the weapon is spinning-up. However, this comes at the cost of a 20% reduction in firing speed.

When eaten, the Sandvich fully restores the Heavy's HP over four seconds; during this process, the Heavy becomes immobile and emits loud eating noises.

Consuming the Dalokohs Bar restores 100 HP over four seconds when eaten, and increases the Heavy's maximum health to 350 HP for 30 seconds. As with the Sandvich, the Heavy becomes immobile and makes loud eating noises.

The Panic Attack is a craftable secondary weapon for the Heavy. It is a Shotgun that has a 50% faster deploy speed, has 50% more pellets, fires its pellets in a fixed pattern, deals 20% less damage, and has a bullet spread that increases the longer it is fired.

In exchange for a slower swing speed, the Killing Gloves of Boxing grant the Heavy 5 seconds of guaranteed critical hits if he scores a kill with them.

The G.R.U. is a weapon that allows the Heavy to move 30% faster while active in exchange for having their maximum health drained.

The Warrior's Spirit is an unlockable weapon for the Heavy. It gives him 30% extra melee damage while also making him 30% more vulnerable from all sources while he wields it.

The Eviction Notice's improved attack rate makes the Heavy's melee attack faster than even most of the Scout's melee weapons, while dealing roughly equivalent damage. It also gives him a 3-second speed buff with a successful hit on an opponent.

Heavies are masters of covering fire when on the advance, and this perfectly supplements a Scout's speed. With a Heavy's firepower dealing damage, Scouts can more safely push carts, capture control points, steal intelligence or ambush enemies, and combined with the Scout's, can make an ideal pair up.

Together, a Heavy and Soldier duo make a tough pair, second in combined health only to two Heavies working together.

Pyros are one of a few excellent distractions for incoming Heavies. The chaos that a Pyro can cause by setting whole chunks of the enemy team on fire can draw attention away from a spun-up Heavy.

Heavies can be just as good as Demomen at area denial for specific locations. Pinning down enemies with the speed of Minigun fire while a Demoman throws out a Grenade Launcher barrage can easily make up for the latter's relatively slow rate of fire and lengthy reload time.

Covering fellow Heavies is imperative for a pair or group of Heavies on the move. Unless you are certain where your enemies will be coming from, check each others' blind spots often and scan for threats. If a single Heavy is a conspicuous presence, a group of them is near impossible to ignore.

Due to the nature of both classes, there isn't a lot a Heavy can do to help Engineers. There is still some teamwork to be found, however.

The Heavy is the ideal Medic buddy in almost any circumstance; he has a huge amount of health (especially when overhealed), a large hitbox to hide behind, and is usually very effective when Ubercharged. When coupled with a Medic, take advantage of these characteristics to keep him alive to help you wade through your foes.

Supporting a Sniper as a Heavy can be as easy as using your large amount of HP and presence to draw enemies out into the open. By giving the enemy something very conspicuous to fight against, the Sniper can go unnoticed until the kills start to stack up.

As with supporting Pyros, Heavies make a fantastic distraction to draw enemy attention away from a Spy sneaking behind enemy lines. A Heavy who is good at drawing fire and prolonging combat can help keep the pressure off a fragile Spy until it's too late for the enemy.