From Team Fortress Wiki
Jump to: navigation, search
This page contains basic strategy for the Sniper. For more advanced strategies, see Community Sniper strategy. For how to play against the Sniper, see Anti-Sniper strategy. 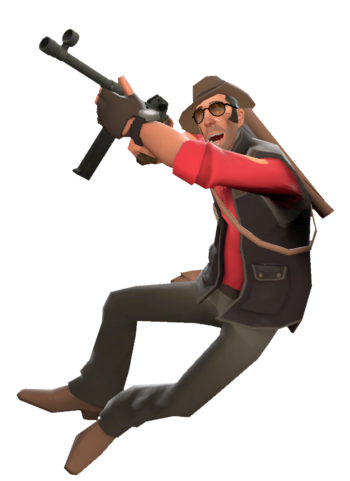 The Sniper excels in picking off enemies from great distances. His ability to headshot lets him deal severe damage to foes before they can even get close. Important targets for a Sniper include enemy Snipers, Medics, Heavies, and Engineers, enemies that tend to withstand or avoid direct assaults. The Sniper is one of the weakest classes at close range combat and is often targeted by classes that operate alone, such as Scouts and Spies. If cornered and alone, he is likely to be killed. A good Sniper supports his team's combat classes from behind, frequently changes sniping spots, and stays aware of his surroundings.

All of your primary weapons can charge to deal significant damage but rely on precise aiming, so experiment with your mouse sensitivity until you feel comfortable. If it is too low, you will have difficulty tracking enemies who actively dodge. If it is too high, you will have trouble aiming at more specific targets, like your enemies' heads.

The Sniper Rifle can zoom in on distant enemies and as a hitscan weapon, is perfectly accurate. While zoomed in, the Sniper Rifle gradually charges to deal extra damage. Additionally, headshots while zoomed are always critical hits. Take your shots depending on the target:

Even if you stay hidden, the Sniper Rifle projects an obvious laser dot that experienced players know to avoid; hide the dot around a corner or take cover as your shot charges. Know that the deathcam reveals your location to your victim. Switch positions often and keep an eye out for any enemies that try to flank you, especially Spies.

The Huntsman fires relatively slow arrows, which travel in a slight arc and can still headshot. The Huntsman cannot zoom in at all, giving you a broader battlefield view but making it difficult to target faraway enemies. Fight closer to the front lines, but stay behind teammates and take cover when possible - arrows take extra time to reload. Keeping an arrow drawn for longer than five seconds causes the Sniper's arm to begin to shake, causing the arrow to become very inaccurate; the "alternate fire" button (default: Mouse 2) uncharges the arrow to regain accuracy. Friendly Pyros can light your arrows on fire, allowing you to ignite enemies from far away.

The Sydney Sleeper gains team support capabilities at the cost of headshot damage. It charges 25% faster and applies the Jarate debuff when you land a scoped shot, but its headshots only deal mini-crits (+35% damage) instead of critical hits (+200% damage). Apply Jarate on important targets like an overhealed Heavy, or quickly charge a full-damage bodyshot for the enemy Medic. Because the Sleeper deals less headshot damage, you are weaker when dueling an enemy Sniper with the default Sniper Rifle and may only damage enemies that the stock Sniper Rifle would kill outright. If you end up fighting alone against a Jarate-ed enemy, follow up with uncharged shots, your SMG, or the Bushwacka.

The Bazaar Bargain rewards experienced Snipers that can stay alive and land consistent headshots; it is not recommended for beginners. The weapon initially charges at 50% of the normal rate. Headshot kills increase the charge rate back to normal at 2 headshot kills and up to double speed at 6 headshot kills. After you acquire a few headshot kills, the increased charge rate can be used to take more bodyshots against evasive enemies or more quickly take out bulky foes in a single headshot. This bonus is lost upon death and can be hard to maintain against experienced players who may target you.

A fully charged Machina shot deals 15% extra damage and can pierce through multiple enemies. Give yourself enough time to charge shots - pick proper vantage points, guess which paths enemies will take, and stay scoped as you creep out of cover. When shooting at a group of enemies, the piercing shot is great for targeting enemy Medics or other classes who hide behind their allies. However, the Machina cannot fire when unscoped and its tracer rounds reveal your location after every shot. Carry a secondary weapon like the SMG for close range fights, or stay near teammates who can defend you, all while occasionally switching locations to keep your foes from following the tracer rounds.

When using the Hitman's Heatmaker, you build a Focus meter as you acquire kills and assists. Pressing the reload key activates the "Focused" buff, which drains any Focus acquired to put you in a meditative state where you charge shots 25% faster and don't unscope after each shot. However, while Focused, the Heatmaker fires tracer rounds similar to those of the Machina, revealing your location. The buff lets you rapidly fire strong shots that can take out multiple enemies if they try pushing into your team all at once. Bodyshots from this weapon suffer a 20% damage penalty and are unable to instantly kill any of the weaker classes, even if fully charged. If you can land headshots reliably, this weapon will often be more useful to you than the stock Sniper Rifle.

The Classic is a callback to the old Sniper Rifle of Team Fortress Classic. It allows you to charge your shot while unscoped, though you still move slowly while charging. However, it can only headshot once fully charged and deals 10% less damage on bodyshots. Because of this, the Classic cannot be used for quick-scoped headshots, leaving you at a disadvantage against enemy Snipers. The Classic's charge mechanics allow you to view your entire, unzoomed screen at any time, useful when tracking a target or watching for flanking enemies. Overall, you gain improved vision at the cost of damage and firing speed. Expert Snipers rarely use this weapon because of its inability to quickly land headshots.

The SMG has better range and damage than your melee weapon and is fairly accurate. It is one of your best close-to-mid range weapons, even if it does lose out to most guns of other classes. Use it to finish off weakened foes or fight enemies that are difficult to hit, such as Scouts. It is easier to defend yourself with the SMG rather than Jarate when you're operating alone or away from teammates. It pairs well with the Sydney Sleeper, to finish off enemies affected by Jarate, and the Machina, which is difficult to use at close range.

The Razorback will protect you from one enemy backstab before breaking, emitting an electronic sound and stunning the Spy for two seconds. However, it deprives you of a secondary weapon and prevents you from being overhealed, making it much harder to defend yourself against combat classes. Note that any semi-competent Spy will notice the Razorback on your back, and may use his Revolver to kill you in three hits. If he tries to shoot you, react quickly enough to defend yourself with your melee weapon or a quick headshot.

Overall, the Razorback works best when fighting near allies, where an enemy Spy would risk revealing himself to your entire team if he attacks you. If you're having problems fighting a Spy directly, consider equipping the Jarate or SMG instead.

Jarate is thrown like a grenade and inflicts a debuff on enemies, causing all soaked enemies to take increased damage in the form of mini-crits. In large firefights, keep a moderate distance, douse multiple enemies at once, and let your teammates finish the job. You can pair it with the Bushwacka to quickly dispatch foes that get too close. Additionally, Jarate can be used to extinguish yourself and burning teammates, and easily nullify a Spy's Cloak and disguise. However, Jarate replaces your SMG, making it harder to fend off combat classes alone.

The Darwin's Danger Shield gives you full afterburn immunity and 50% resistance to fire damage, but replaces your SMG. This gives you some protection when facing enemy Pyros who shoot flares at you, but also makes you unable to fight back effectively if they get too close, as they can airblast you away if you charge them with your melee weapon. Stay close to teammates, who can protect you from enemy combat classes.

The Cozy Camper is a secondary weapon that enhances long-ranged sniping. It prevents flinching when your shot is fully charged, which prevents enemies from throwing your aim off by shooting you. To make use of this effect without drawing attention, you will likely need to fully charge your shot before leaving cover. The Cozy Camper also lessens all knockback experienced, further aiding precision when aiming. Its innate health regeneration can lessen damage from afterburn or bleeding inflicted by various long range weapons. The lack of a secondary weapon encourages you to camp away from the front lines (hence the name).

The Cleaner's Carbine is a weaker backup weapon than the SMG, but brings potential for more offense. The Carbine builds up a "CRIKEY" meter as it deals damage. Alt-fire when the CRIKEY meter is filled grants guaranteed mini-crits for eight seconds. Find opportunities between sniping, such as killing weakened enemies or dealing chip damage, to build up CRIKEY. Once the mini-crit boost is acquired, pick a weapon to rampage with. If you switch weapons, the Huntsman or Bushwacka work well with mini-crits. If you stick with the Carbine, focus on accuracy instead of firing rapidly, as reloading will consume a little over a second of your mini-crits.

If you are forced to enter melee combat with the Kukri, avoid blindly charging in and try to dodge enemy attacks - your low base health and short melee range leaves you vulnerable to ranged weapons. Instead, strike once the enemy has depleted their ammo and is reloading. If you do not need to approach an enemy, use your ranged weapons until aiming becomes difficult.

The Tribalman's Shiv deals reduced damage but inflicts bleed. When including the bleed effect, one hit from the Tribalman's Shiv does more damage than the Kukri, but over a longer period of time. Despite dealing higher total damage, hitting a healthy enemy with this weapon will usually not dissuade them from continuing to attack you. Land one hit, then back away to supplement the bleed with ranged attacks. The SMG or Jarate can be used alongside this weapon for consistent, moderate damage. The bleed effect can also be used to track down Cloaked Spies, as they will flicker each time they take damage.

The Bushwacka deals critical hits whenever you would normally mini-crit. It can be combined with mini-crit boosts from your various weapons, including the Sydney Sleeper, Jarate, and Cleaner's Carbine. Out of all of these, using the Bushwacka in combination with Jarate to quickly dispatch nearby foes is most consistent. It is least effective alongside the Sydney Sleeper, as enemies will rarely charge directly at you while afflicted by Jarate. Be wary when approaching your target, however, as the Bushwacka's small melee range and increased damage vulnerability will allow enemies to kill you faster - most notably the Scout or Soldier, who may kill you instantly with a point-blank Scattergun or Rocket Launcher attack.

The Shahanshah deals 25% less damage (49 damage) when you're above half of your maximum health and 25% more damage (81 damage) when you're below half of your maximum health. Use other weapons, such as the Huntsman or SMG, for close range combat until your health is low enough that you can use the Shahanshah as a strong last resort.