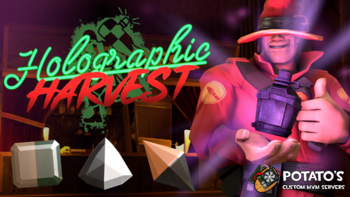 Operation Holographic Harvest was a community Mann vs Machine tour organized and hosted by Potato's Custom MvM Servers. A public beta for the tour began on October 10, 2022, which ran until October 27, 2022, when the tour officially launched. The campaign concluded December 1, 2022.

On October 10, 2022, Operation Holographic Harvest went into public beta, with 23 missions spread across 16 maps, including Halloween-themed reskins of official maps, such as Decay and Madhattan, reskins of Decoy and Mannhattan, respectively, as well as other new maps, and returning maps from previous campaigns.

This event had four medals up for grabs: one as a reward for completion of the tour, and three for donations to a charity drive benefiting The Rainforest Trust.

All four medals initially drop with unique paint configurations: the Haunted Scrap Canteen drops with a saturated purple color, similar to the Haunted Metal Scrap, and the Carbon Compassion drops with a khaki brown color on RED team, and a dark shade of green on BLU team; all of which are special colors not otherwise available in-game. The Zebra Zirconia medal is painted A Distinctive Lack of Hue on RED team, and An Extraordinary Abundance of Tinge on BLU team, while the Lahsuniya Ratna medal is painted Mann Co. Orange on RED team, and A Distinctive Lack of Hue on BLU team.