From Team Fortress Wiki
(Redirected from Madness vs Machines Pinnacle of Ingenuity 2019)
Jump to: navigation, search 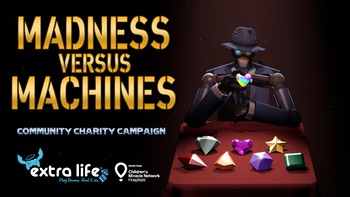 This table shows the maps and missions that were in rotation during the Madness vs Machines campaign. A total of 45 maps (13 from the contest) and 98 missions (27 intermediate, 57 advanced, 14 expert) were available to play.