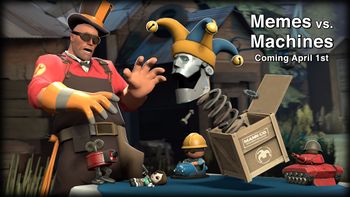 Operation Memes vs Machines was a hybrid mission-making contest and Mann vs Machine tour organized and hosted by Potato's Custom MvM Servers, and was announced on February 1, 2019. The tour was held from April 1, 2019 to April 16, 2019. 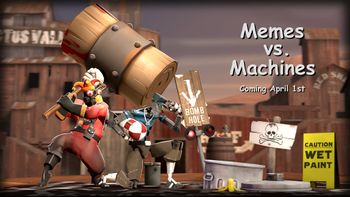 On February 1, 2019, Operation Memes vs Machines was announced to the public, starting with a Mann vs. Machine mission-making contest which would last until February 28, 2019.[1] After which, judges would judge the missions in between March 1 to March 3, then mission submissions would be open again until March 28, where, once again, they'll be judged by judges in between March 29 to March 31.[2] After this, the servers would be open and the tour would start.

There were a few guidelines set for mission-makers. Primarily, these missions had to be "meme missions," with the primary objective being absurd Mann vs. Machine waves that would make people laugh. All missions submitted had to be of Intermediate difficulty, and they could have an unlimited amount of waves, so long as they were of "reasonable" length. Mission-makers could generally put whatever they wanted into their missions, though any satire, sarcasm, or dark humor would be questioned and possibly rejected. Each participant could create a maximum of 2 missions, and 2-3 participants could collaborate on one shared mission.[2]

On April 1, 2019, the Canteen Crasher campaign servers were overtaken by the Memes vs Machines missions. Waves of memes from the contest were run on selected community maps previously used on Potato's Custom MvM Servers, in addition to a completely new haunted community Mann vs. Machine map, Shadows.

In keeping with the short duration of the community event, one simple, short tour was offered, with only one medal in reward, rather than a extensive campaign. Originally planned to last only a week, the tour was extended to April 16, owing to the strong community participation, which nearly continuously occupied over 50 servers the first week.[3]

This table shows the missions available during the event. Every mission in the campaign was of intermediate difficulty.

This event had two medals up for grabs. Players who completed 60 minutes of successful wave time were awarded the Memes vs. Machines Baked Potato ("successful" meaning that time played in any wave only counted if the player both started and completed the full wave; a wave could be completed multiple times, but the total time spent was capped at 4 minutes per wave). In addition, content creators were awarded the Memes vs. Machines PotatOS Server.

Operation Memes vs Machines was initially supposed to have another reward, which would've been a "donor" badge.[2] The donor badge would've been given out to donors who donated at least $5 USD to the Extra Life charity organization. According to Memes vs Machines' GitHub page, this badge would've also been given to mission creators who got their mission accepted, even if they didn't donate.