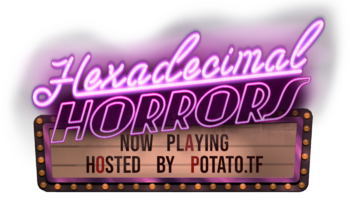 Operation Hexadecimal Horrors was a hybrid mission-making contest and Mann vs Machine tour organized and hosted by Potato's Custom MvM Servers. It was announced on June 21, 2021. A public beta was held for the tour on October 2 to 11, 2021, before it officially launched on October 12, 2021. The tour concluded on November 30, 2021.

On June 21, 2021, Operation Hexadecimal Horrors was announced to the public, starting with a Mann vs. Machine mission-making contest which would last until August 20, 2021.[1]

There were a few guidelines set for mission-makers. Primarily, these missions had to be Halloween themed. All difficulties of mission were welcome, with a maximum of fifteen weapon rebalances. Each participant could create a maximum of 2 missions, with the exception of Intermediate missions, which were not subject to this limitation.

On October 2, 2021, Operation Hexadecimal Horrors went into public beta, with 48 missions spread across 22 maps. Halloween revamped versions of Valve maps were used, such as Decay and Heatrock, in addition to new haunted community maps, and returning maps from previous campaigns. The tour officially launched on October 12, 2021, shortly after the Scream Fortress XIII update, to ensure the servers would be compatible with the update.

Unlike previous campaigns, there is no in-game reward for completing missions in the tour, though players may continue to track their tour progress.

The Moonlit Magnate and Macabre Memento reuse the same models as the Hopeful Heart and Boundless Heart from Operation Madness vs Machines, respectively; however, the Moonlit Magnate initially drops with a custom painted color that is very similar to A Deep Commitment to Purple, (HEX #7D4070, compared to A Deep Commitment to Purple's HEX #7D4071) that is not otherwise available in-game.