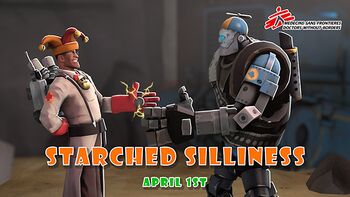 Operation Starched Silliness was an April Fools Mann vs Machine charity tour event organized by Moonlight MvM and hosted by Pineapple.TF that was announced on March 31st, 2021, and concluded on April 19th, 2021.

The tour resembled previous campaigns hosted by Potato's Custom MVM servers, featuring many of the same maps, with different missions, along with new maps such as Thematic and Ventus.

This event had three medals up for grabs. Players who had completed at least six missions in full were awarded the Genuine Starched Silliness Potato Lookalike 2021. In addition, content creators were awarded the Super Spud medal, and players who donated five dollars or more to the Doctors Without Borders COVID-19 charity drive were awarded the Curious Carbon medal.

The Potato Lookalike and Super Spud medals reuse the model for the participation and content creator medals previously awarded in Operation Memes vs Machines and Operation Mashed Mediocrity, while the Curious Carbon reuses the model for the Tempered Tourmaline medal from Operation Madness vs Machines; however, the Curious Carbon medal initially drops with a special diamond blue color applied that is not otherwise available in-game.

Each medal has two styles, named "Style 1" and "Style 2" for the Potato Lookalike and Super Spud medals, and "Normal" and "Gem Only" for the Curious Carbon medal. The Potato Lookalike's Style 1 depicts the potato with its parasol, while Style 2 depicts it wearing the parasol like a hat. The PotatOS Server's Style 1 depicts a potato with computer parts strapped to it, while Style 2 depicts only a screen, with a pixelated smiling potato. The Curious Carbon's Normal Style depicts the gem being gripped by a robot hand, while the Gem Only style removes the hand, leaving only the diamond gemstone.