From Team Fortress Wiki
Jump to: navigation, search
This article is for content released in the update. For the patch itself, see May 21, 2009 Patch. 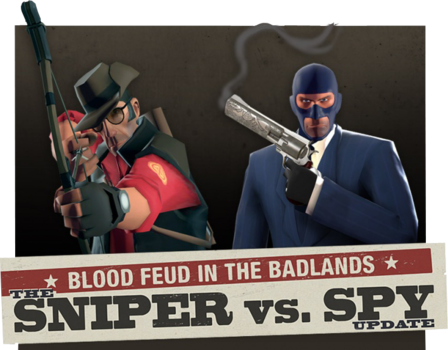 The Sniper vs. Spy Update was the first two-class patch and the fifth major content pack released for Team Fortress 2.

Initially at the center of the update was the Sniper class, and the day by day progress went smoothly. An announcement on Day 4 revealed that the Spy would also benefit from the update. Each class was given three new weapons along with achievements.

The Sniper vs. Spy Update page officially began on May 12th, 2009, as announced on the Official Blog post "G'day". The update was released on May 21st.

There was a 2-day gap between announcements due to the weekend. Announcements resumed as usual on May 18th.

While officially announced on May 2nd, 2009, Valve had hinted prior to the release. 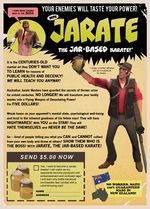 On April 1, 2009, Valve published a post on the Official Blog, "a sneak preview of the next class update!", showing an order form for the Sniper's new weapon, Jarate. However, due to the date of the posting, April Fool's Day, many believed the advertisement to be a joke.

The next day, April 2, 2009, Valve published yet another post on the Official Blog, "Wave goodbye to yer head, wanker", which confirmed that the Sniper was indeed the next class to be receiving an update. The post also hinted at 2 other updates, one that would be completed before the Sniper Updates release, and another that include some new content for all classes. These were later revealed to be the Spy update and the addition of hats respectively.

On May 5, 2009, Valve made a post titled "You better hold onto your head, mate" which explored the reasoning as to how the Sniper's new primary weapon came about. It discussed that one of the main reasons for the unlock was due to players feeling hatred toward Snipers, as they were the cause of many deaths that were outside their area of engagement. The article concluded with stating that the Sniper's new unlock would promote the Sniper to move in closer to his enemies to give them a fighting chance.