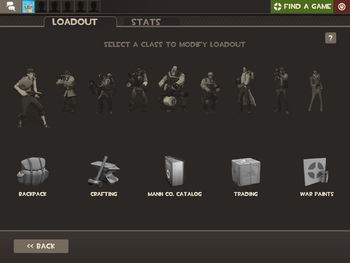 The customize items menu is a section of the main menu UI in Team Fortress 2 that gives access to the loadout, backpack, crafting, Mann Co. Catalog, trading, and War Paint sub-menus. The manage items menu also displays the player's personal statistics and high scores on the stats page. The manage items menu can be accessed from the "Items" button on the main menu screen, however, the default key M (or the command open_charinfo_direct) will load the menu directly when inside a server.

By clicking any of the nine class portraits the player is taken directly to the loadout of the respective class. The five icons along the bottom – backpack, crafting, Mann Co. Catalog, trading, and war paint – will take the player to those submenus.

An example of the loadout screen.

The loadout menu enables the player to equip items and taunts for use with the nine classes.

The left of the loadout screen features the player's selections for primary, secondary, and melee weapons. The Spy's menu screen positions the PDA slot (for Cloak watches) in the place of the secondary slot. The Engineer and Spy loadout screens also include a fourth slot for the Construction PDA and Sapper (PDA) respectively. The right four slots consist of three cosmetic slots for hats or Miscellaneous items, and one for action items. Clicking the movie reel on the bottom allows you to switch to the taunt menu where you can equip any taunt you have in your inventory to a maximum of 8 at once. Pressing the box next to it will bring it back to the regular loadout. Pressing G while having one of the taunts equipped will bring you to a taunt HUD which allows you to select a taunt.

Mousing over any of the slots for equipped weapons will display the statistics and description pertaining to the item, in a similar format to the backpack. This information (and more) can also be seen at any time in the Mann Co. Catalog without having to own the item. At the bottom of menu, the player's net attributes from their equipped items are shown as an overview.

When a player changes their loadout mid-game, any changes made to the current class's loadout will only take immediate effect if the player is in the spawn area. Otherwise, they will not take effect until the player either respawns, or touches a resupply locker.

The backpack is a player's personal inventory, allowing for storage for all in-game items. Items are kept in individual slots and can be viewed, moved, customized or deleted from within the backpack interface. The backpack is divided in to pages, with each page displaying 50 items. The backpack can be automatically sorted by quality, type, class or loadout slot.

Crafting is the process that allows players to combine items they have in their backpacks in to new items. Through using specific crafting blueprints, more desired outcomes can be obtained, such as crafting a specific weapon through its designated blueprint. It should be noted that not all items can be used as an ingredient, nor can all items be obtained as an outcome.

The Mann Co. Catalog contains a listing of (almost) every item in the game, allowing for a quick lookup of item appearances, statistics and descriptions. It will also displays a button leading to the listing of an item in the Mann Co. Store (if available), additionally a link to the item's page on the Team Fortress Wiki will be displayed.

The trading submenu will allow a player to exchange items with other players directly through Steam friends, current server players, or a Steam Community URL. However, this feature is partially disabled for all free to play players; they can receive items in a trade initiated by another player, but are unable to give any items in return.

The War Paints submenu allows a player to preview every War Paint available for every applicable weapon. The menu contains drop-down menu for each War Paint, a drop-down menu for each weapon a given War Paint can be applied to, and a slider to change the Wear of the War Paint – from Factory New to Battle Scared – as well as buttons to switch the team color. Additionally, you can select the Randomize button, or set the seed manually, to preview the position of the texture applied to the weapon, though this is not available when redeeming War Paints. You may also select the View on Market button to find the current weapon with the applied War Paint on the Steam Community Market. 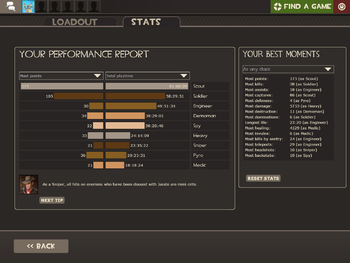 An example of the statistics screen.

The statistics tab opens up the best records and playtimes of the player. Statistics tracked include:

Drop-down boxes will allow you to look at statistics for specific classes displayed as horizontal bar charts. A random tip will also be displayed on this screen, a new one can be forced by clicking the "Next Tip" button. These statistics can be reset by a button on the right (by doing this progress in locked achievements will be reset, but any unlocked achievements will not be reset).