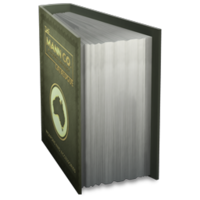 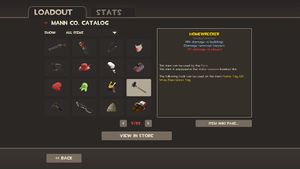 The catalog may be accessed through the "Items" screen on the main menu.

Nearly all of the items presently or historically obtainable in the game are listed in the catalog. The arrows may be clicked to scroll through the pages, or a parameter may be chosen from the drop down box. When hovering over an item, a larger image of it will pop up. Upon selecting an item in the Catalog, information will be provided through the Info Pane.

This box provides detailed information about the items available in Team Fortress 2. When an item is selected, the Info Pane indicates which class may equip the item, the slot to which it is assigned, provides a brief item description, lists the item's effect(s), and also lists the tools that are compatible with it.

This button leads to the selected item's Mann Co. Store page, where it may be available for purchase. On the item's store page, players can preview the item in use by any class that may equip it. This button does not work with the new Mann Co. Store UI which has been assigned to users at random for testing.

This button opens the selected item's article on the Team Fortress Wiki in the Steam Web Browser.

This tab leads back to the Stats page.