Mossrock is a community-made Attack/Defend Control Point map released during the Jungle Inferno Update. It takes place in a jungle that houses radio stations that can control minds.

Mossrock is a jungle-themed remake of the community-made map Whiterock Mossrock was contributed to the Steam Workshop.

From BLU Base to RED Base is a series of three buildings for the teams to control, each separated by a small yard of broken terrain to fight through. Each building carries the name of one of the generally unaligned companies. The main BLU attack usually proceeds up the right to gain one end of The Bridge. With the capture of The Bridge, the BLU attack splits to control wide attack angles on The Trestle just outside of RED Base.

There are two Capture points:

Capture point A: "The Bridge"; on a covered bridge across the Chasm. Capturing this point before time runs out advances the BLU Spawn to the Casali building and adds time to the game clock.

Capture point B: "The Trestle"; on the platform across the Train trestle from BED Base. Capturing this point before time runs out wins the game for BLU.

The balanced design of this map gives RED easier to defend positions the furthest from their spawn: RED has a narrower front with high ground positions to defend when furthest from their spawn. But after the loss of the Casali building, RED must split its forces to defend and counter-attack 2 or 3 positions depending on the thrusts of the BLU Team. Should The Bridge fall, BLU then has three main ways into the Jenkin building from its forward spawn, which is relatively central to all of them. The final point faces three positions behind which BLU can rally for short pushes onto the point, possibly time with the passing of the Train that cuts through RED defense of the point.

This building is a small control center for BLU, containing the initial BLU spawn, with all three exits covered by RED's high, sheltered positions on both the left and right.

This building controls the high left and right exit paths from BLU Base and has a firing position over the low middle path from BLU Base.

This building has an Entry room and a large Main room with a large doorway opening directly on the Bridge point, a Balcony opposite with BLU's forward spawn, and a smaller Side Door that flanks both ways depending on who controls the building and The Bridge. Typically, BLU secures the Main Room before attempting The Bridge.

This is a complex of three buildings connected by Corridors that controls the final approaches to The Trestle.

The RED Base contains the satellite Data Link inside a mining facility and faces the final yard the teams have to fight over. The Trestle and final yard in front of the RED Base is naturally RED's "last stand" should that team be driven from the Jenkin building. 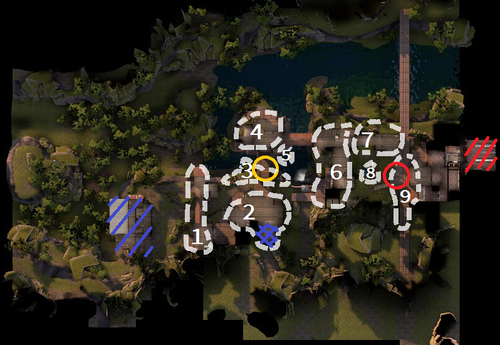 This is the changelog of the map before it was added to the game.
Changelog:
Jul 4 @ 2:17am