From Team Fortress Wiki
Jump to: navigation, search
This article is for content released in the update. For the patch itself, see December 17, 2009 Patch. 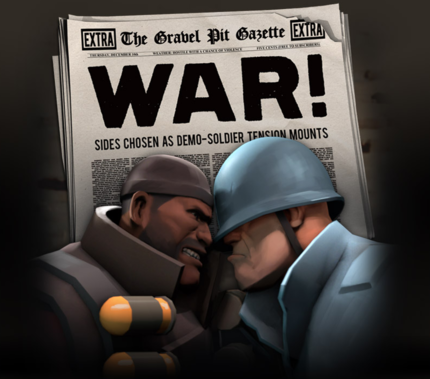 For the comic, see WAR! Comic.

The WAR! Update was a class update for the Demoman and the Soldier. It was the second multi-class patch, and was the sixth major content pack released. The Update was first announced on December 9, 2009, and was released in the December 17, 2009 Patch.

The WAR! Update differed from previous updates by including two competitions, operating inside and outside the game. The first was announced at the start of the update; a kill tracker appeared in the HUD of anybody playing as a Demoman or Soldier, with the counter increasing each time they (as a Soldier) killed an enemy Demoman or they (as a Demoman) killed an enemy Soldier. The personal totals of each player were added to a mass tally, and with each day of the update a running total score for each side was displayed on the update page. The Soldier won with 6,406,065 total kills to the Demoman's 6,372,979, granting the Soldier the prize of an extra unlockable weapon, the Gunboats.

The second competition was the Propaganda Contest. Users were encouraged to design propaganda posters for the side of their choice, supporting either the BLU Soldier or RED Demoman. The posters were then submitted to Valve to be judged through the Propaganda Contest website. The three leading prizes were later revealed to be J.Axer's Dapper Topper, Amber's Rad As All Hell Hat, and Uncle Sam (for first, second, and third place respectively).

The WAR! Update page officially began on December 10th, 2009 as announced on the TF2 Official Blog post "The War Update". The update was released on December 17th.

Teasing of the WAR! Update began with the December 7, 2009 Patch when new Administrator voice files were added to the game – which were randomly switched out with the normal voice files during gameplay if a Demoman and Soldier were being played by opposing teams. She would voice her disappointment and hint at the upcoming conflict by stating that her trust had been "betrayed" and that "Friendship will not be tolerated".

The first official hint came on December 9th 2009 with the blog post "Attention Employees...". It contained a single sentence of "Friendship ends in one day." and a link to a comic where Miss Pauling revealed to the Administrator that the BLU Soldier and RED Demoman had become friends. Fearing that the two would eventually find out that they both work for the same person, the Administrator told Miss Pauling to contact Saxton Hale and order some new custom weapons as she was going to make the friends compete with each other.

This comic continued over the next few days alongside the update itself. It continued on to show Saxton Hale being contacted and shipping out the new weapons, and the Demoman and Soldier being tricked into competing with each other.