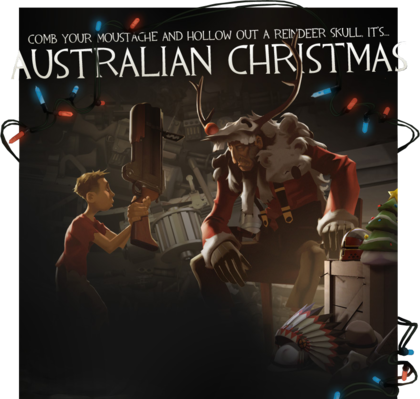 The Australian Christmas was a major content update for Team Fortress 2 and was released on December 17, 2010 Patch. It was the first in what would later become the annual Smissmas event.

A new game mode, Medieval Mode, was introduced with this update. It featured a new map, DeGroot Keep.

The update also increased default backpack slots from 200 to 300, and added the ability to acquire additional slots (100 at a time) by purchasing the Backpack Expander item. The maximum backpack size became 1000 slots.

This update also introduced the Itemtest map for the first time.

On December 18, 1788, less than a year after the first settlers colonized Australia, an old cutthroat named Nicolas Crowder arrived on a boat with some other new settlers, took one look at the heat and privations, said "screw this," commandeered the boat, and set course on a one-man voyage to conquer the South Pole. Legend tells that he lives there still.

Every December 18th, "Old Nick" returns down under to find out if Australia's children have been naughty or nice. The nice children are given the greatest gift of all -- they are not abducted along with the naughty ones and carted off to the South Pole.

For the next twelve months, the naughty children make toys to Old Nick's exacting specifications. Then, on December 17th, the presents are gift-wrapped, placed in a sleigh, and driven to Old Nick's mansion, where he opens them. Naturally, given the sheer number of hats and weapons Old Nick receives, there are bound to be duplicates – and every December 18th, he posts them online, selling them at prices so low that he's practically giving them away.