DeGroot Keep is an official Medieval Mode Attack/Defend Control Point map that was released with the Australian Christmas update as a part of the December 17, 2010 Patch. It is currently the only official map designed for this game mode.

DeGroot Keep is a fairly small Attack/Defend map, featuring DeGroot Keep, the namesake of the map. The buildings and fortifications on the map are medieval-style, and Health pickups inside the keep appear as medieval-style roast meat. DeGroot Keep is supposedly a 10th-century manor, but there are several hints scattered throughout the map that suggest that the team is merely in some kind of medieval simulation.

DeGroot Keep has three Control Points. Point A and Point B are located outside of the keep, and Point C is located in the courtyard of the keep. The only entrance into the keep is the castle gate, initially closed and impassible. until BLU captures Points A and B. This forces RED to mount a defense from the top of the castle. RED can fire projectiles from above or leap off the walls to engage BLU directly.

Players can shoot projectiles through the grills of the castle gate or arrow slits in the towers. Braziers and torches located near the team bases can be used to set arrows on fire for additional damage.

DeGroot Keep is a small single-stage map containing three control points and two bases in a similar fashion to Gravel Pit and Junction. 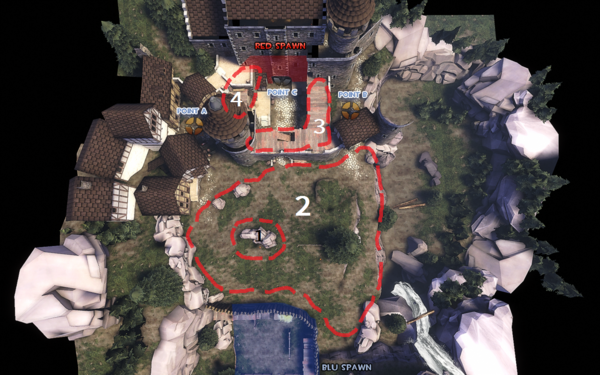