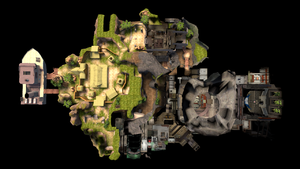 Meridian is a custom Territorial Control map. The map takes place on an ancient tropical island in the middle of the sea. Unlike in Hydro, where the goal is to capture each control point in each territory on the map, Meridian instead uses capturing Intelligence as the goal. Whoever captures the Intelligence in each area captures the territory. For each "final stage" (for both BLU and RED), the defending team wins by holding onto their intelligence until time expires. 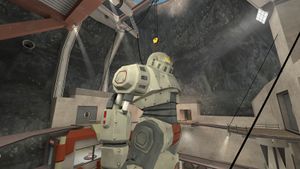 The robot inside the volcano

A robotics facility inside a volcano where the RED team appears to be building an enormous battle machine of sorts. The Intelligence rests in an observation post on the second floor of the volcano's walkway system. 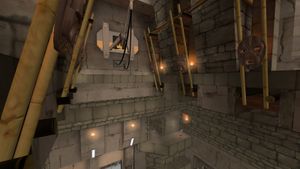 Inside the Tiki Temple

An ancient temple, which has been overrun by the BLU team and is currently being used as a base of operations against RED on the island. Much of the temple's original architecture has been refitted with lighting and equipment brought in by the BLU team. The Intelligence can be found outside BLU's spawn, inside the base of the temple. 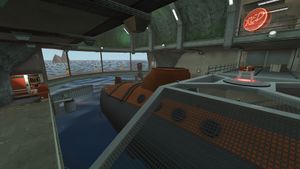 A submarine bay located on the edge of the island's coast. The Intelligence sits on a grated walkway near the entrance hatch of the submarine. 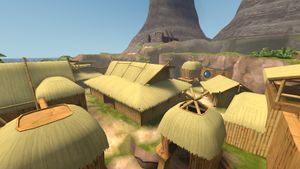 This walled village appears to have once been the home to a group of tribal natives. Many of the buildings have been re-purposed as supply and power centers for BLU operations. The Intelligence sits in the basement of a large building in the center of the village. 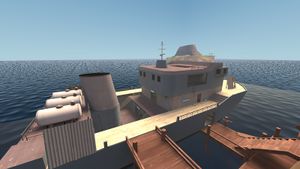 The last line of defense for BLU operations, this large barge located outside the old native village contains minimal munitions and technology, but is placed in a region so environmentally diverse that a counter-attack is still plausible and capable of succeeding. 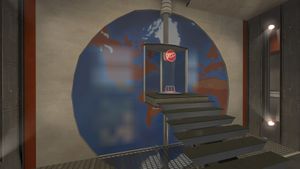 A rotating globe and intel inside RED Team's base

This secluded, highly guarded section of RED's operation clearly shows their plans and goals far beyond the conflict over this island. A highly condensed, tightly compartmentalized, and cleverly constructed mass of tunnels and catwalks guards the last line of defense for RED's global intentions.