Solitude is a Payload Race map created for TF2Maps.net's A/D CTF and Payload Race Contest. It was awarded third place in the competition with a score of 3.80 out of 5 points.

Both teams must simultaneously push their carts through enemy territory in order to reach the capture point, while preventing the enemy team from doing the same. 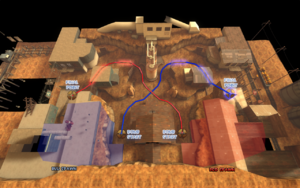 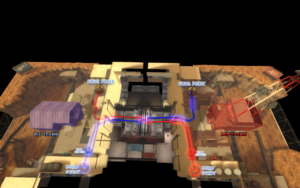 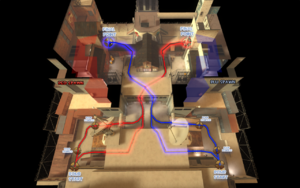 The RED and BLU bases are identical. Both have two exits, one that leads to the area around the final destination for the enemy team's cart, and another that opens up into the center of the map. There is also an area above the resupply room in both bases that can be reached by rocket or sticky jumping, but it does not lead outside and enemies cannot enter it.

The cart tracks for both teams start directly in front of their respective base exits, and intersect quickly in the middle of the map. Between the two exits is a building with a medium health-pack and ammo crate. It is possible to rocket or sticky jump onto the roof of this building, either from within it through the opening in its roof or from outside, giving a good vantage point from which to observe the entire map, and, particularly, the enemy base's door. On the other side of the cross is a row of silos, and the other two sides are flanked by elevated areas with ramps. On these elevated areas are small buildings with small health-packs next to them.

Both final capture areas can be accessed by their respective team's base, and a slightly elevated, albeit small, vantage point over the point serves as the defenders' entrance. The BLU team's point is bordered on its left by a fence, behind which is a view of a body of water, a docking area and a train track coming out of a tunnel. The RED team's point's fence has several silos, a train track and a train behind it. The other two entrances to the final capture areas are the small, narrow doorways that allow entry directly from the central cross, and the larger, more open entryway that follows the path of the cart track on the end opposite the defending team's spawn.

There is also a building that can be accessed from this entrance area. In it are a medium health-pack, a small ammo crate, and a window and a door that allow the final point to be shot at and approached from the building. There is another building on the other side of the entryway, oriented perpendicularly to the first building, which consists of nothing more than a door, a staircase leading up to a second level, a large opening in that second and a ledge. Between this building and the one on the opposite end stretches a length of barbed wire, which stops any player that hits it, for instance rocket-jumping soldiers, and deals 5 damage in short intervals.