Strata is a custom Territorial Control map made by YM. The map takes place at a paleontological dig, with each final base being a fossil museum showcasing different kinds of prehistoric fossils. Some of the maps locations are also directly inspired by the Jurassic Park series, most easily noticeable with RED's final control point, as it bears a resemblance to the inside of the Visitor Center from the first Jurassic Park movie. 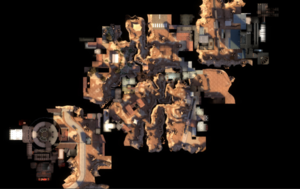 Overview of the map in Beta 1C status

RED's museum has a vehicle road connected to it