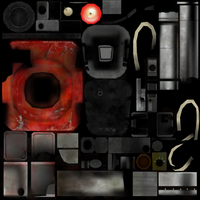 The texture of Tobor.

Tobor is the name of a scrapped texture that was found in the props_training section of the GCF files, which were added as part of the Mac Update. It is unknown what the texture was planned to be used for, but it was speculated to be part of the Engineer Update as some form of Sentry Gun replacement or upgrade, as it shows what appears to be the tubes, eye, and metal casing of the Sentry Gun.

The texture of Tobor has been removed from the game's files as of the Engineer Update and is no longer found in props_training. Its inclusion in props_training suggests it was supposed to be used in a training map. The TF2 team has stated that Tobor was a dump for a training mode that was intended to be playtested by a third party. The dump was originally left in the game but was later removed.