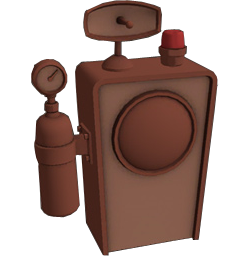 Like many video games, Team Fortress 2 changed significantly over the course of its development. Decisions as to how the gameplay would work changed, such as whether or not grenades would be used like they were in Team Fortress Classic. An item might have been cut simply because it was replaced by something better, like the Soldier's medals, and sometimes content was cut due to the change in the game's style. Listed on this page are weapons, items, and other odds and ends that were cut from the game, but in most cases left over in some form in the game's content (.VPK) files as unused content.

The only grenade projectiles in Team Fortress 2 are those fired from the Demoman's primary weapons. Additionally, the Soldier detonates a grenade as part of the Grenade kill taunt, albeit without throwing it. The Pyro also wears a bandolier holding three incendiary grenades, but they are purely cosmetic.

Grenades were a strong feature of Team Fortress Classic, but were scrapped during the early testing stages of Team Fortress 2. Developers have revealed that this choice was due to gameplay concerns with how they were used, such as being thrown randomly at chokepoints, certain potential exploits, and general over-reliance on them as a whole.

Each class was set to have primary and secondary grenades, with the primary grenades being Frag Grenades and secondary grenades possessing more specialized functions. There is still code pertaining to thrown grenades in the server_i486.so file, as well as keybinds related to grenades (+grenade1 and +grenade2). Players would have to holster their weapons in order to switch to the Grenade slots and use their grenades. Some remnants of this holster system can be found in the form of holster/unholster animations in models/weapons/v_models/v_bat_scout.mdl, models/weapons/v_models/v_smg_sniper.mdl and models/weapons/v_models/v_shotgun_soldier.mdl. v_bat_scout.mdl's holster animation was designed for the original bat model from the early trailers, rather than the model actually used in the final game, so the bat appears to get stuck inside the Scout's arm.

An unobtainable crafting item called a "Grenade Token" used to exist, but was removed with the Mann-Conomy Update.

Throwable weapons were a new class of weapons being tested internally.

In addition to weapons, several items were created for TF2 that were ultimately never fully implemented or used. All of the items on this page originated from the VPK files.

These are unused robot templates that exist in the game files.

This version of Major Crits is exactly the same as the gatebot version seen in Mannhattan except this version wears the Full Metal Drill Hat instead of the Gatebot Helmet. But there is an unused icon in the game files that is still functional but is never used. It is an icon of the Full Metal Drill Hat and is known as soldier_major_crits. The gatebot version of Major Crits uses Colonel Barrage's icon: soldier_barrage.

These Vaccinator Medic Robots were meant to use an item named "The Vaccinator MvM" in items_game.txt, but the item does not exist.

These are unused buff that exist in the game code.