From Team Fortress Wiki
Jump to: navigation, search
This article is for content released in the update. For the patch itself, see June 10, 2010 Patch. 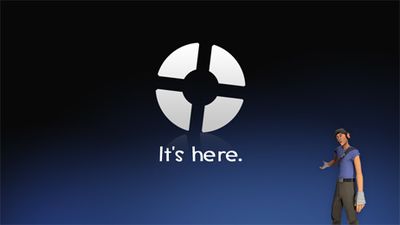 The Mac Update was the first major update for Team Fortress 2 that included support for a platform other than Windows. The patch was released on June 10, 2010 Patch, and its main feature was providing the ability to play the game on Mac OS X machines. The update also included a Training mode and its associated map Target, added help sections to the Loadout, Backpack and Crafting screens, and also completely overhauled the main menu. The patch also added the ability to play King of the Hill maps and Dustbowl in Offline Practice Mode against bots, and made a number of other minor changes. After the update went live, the Mac Update trailer was released as was a non-canon Apple-themed comic strip featuring the Soldier, Scout, Heavy and Saxton Hale.

The release of the Mac Update also offered players the opportunity to acquire a new Cosmetic item, the Earbuds. The Earbuds were originally awarded to players who launched Team Fortress 2 on a Mac between June 10, 2010 and June 14, 2010, however the offer was later extended to August 16.[1] The Earbuds were only the second promotional item to be included in Team Fortress 2, and were the first promotional item to be released that was not directly related to Valve or any of their products.

The Mac Update was first teased by Valve on June 9, 2010, a day before its release through a post on the official blog entitled Tomorrow. Below the image included in the blog post (which prominently featured the Earbuds), Valve made several remarks hinting at the Mac Update. The update was officially released the next day on June 10, 2010, which also included the Mac Update trailer.