Highpass is a community-made King of the Hill map with a radially symmetric layout released in the Tough Break Update. It is set in an industrial area within the desert. Both teams attack through their industrial bases, fighting to be the king of the central control point, which is located on the middle bridge. There are multiple routes to approach the central point. The vertical design and the height differences between the areas ensure a unique gameplay.

The goal is to capture the single, central control point and control it for a duration of 3 minutes, while stopping the other team from doing the same.

Highpass was contributed to the Steam Workshop. 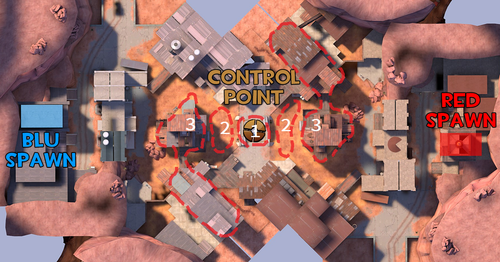 Texture of the model itself.