Junction is an Attack/Defend Control Point map. It was included with the Scout Update as an official community-developed map due to its outstanding quality. Its design is similar to Gravel Pit.

The goal for BLU is attacking and must capture all three points in order to win the match. A and B must be captured before C can be. For RED to win, they must hold out and prevent BLU from capturing the final point C. Time is added to the countdown if BLU captures either point A or B in order to buy more time for the capture of point C.

Junction is a tight, enclosed map with lots of hallways and passages leading to the three main control points. Make use of the Demoman and Soldier classes here for optimal results defensively and offensively.

Point A is located in a small room; it lies on an elevated platform with two sets of stairs leading up to it. The stairways are underneath the point itself, one in front facing BLU's spawn and one on the side.

Point B is located in a larger room with a balcony that covers two walls within it. B is in the corner where the two balconies meet, and it is only accessible through two side doorways. The point itself is covered by an indestructible window, preventing enemy fire directly on the point. Two stairways border and lead up to the point.

Point C is located on a platform that rests on an elevated area that is, again, only accessible by stairs. The point itself has a small balcony surrounding its front side and two side doors. Stairs lead from the point down to the elevated area. The elevated area also has stairs leading down to ground level. There are three entrances to C, two from A and one from B. The entrance from B is at the bottom of a flight of stairs, and the two from A are small doorways. 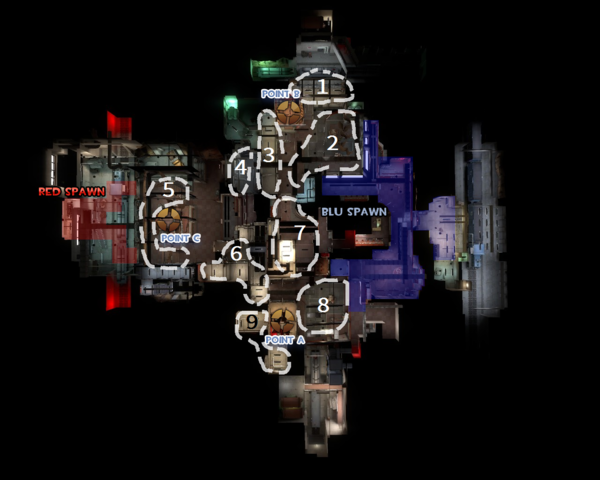 Computer near BLU's setup gates that players can walk behind.