From Team Fortress Wiki
Jump to: navigation, search
Harvest has multiple variations, including King of the Hill.

Harvest Event is a King of the Hill map. It was released with the Haunted Halloween Special Update as an official community-developed map due to its outstanding quality. This is a Halloween-themed version of the Harvest. It includes many gameplay elements that are unique to the map.

In this Halloween version, as with all later Halloween maps, health packs are reskinned as chocolate bars and candy tins. Pumpkin bombs are scattered strategically throughout the map and explode when shot, damaging and possibly killing players (regardless of team) in close proximity. Killed players will randomly drop a crit-boosting Halloween pumpkin full of candy. The ghost of Zepheniah Mann wanders around the map, haunting any players who venture too close. Soul Gargoyles spawn on the map for each player individually during game play.

As with the original mundane version, the players' goal is to capture the control point and seize it for a duration of 3 minutes while stopping the other team from doing the same. 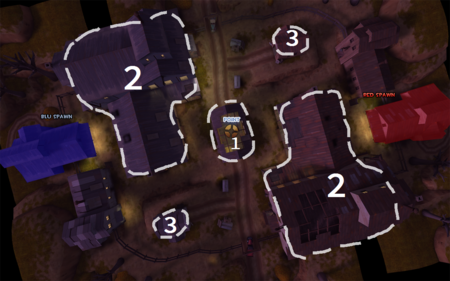