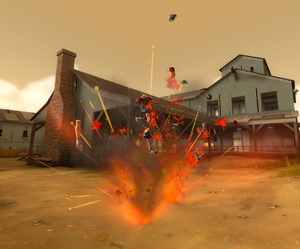 A BLU Scout gibbing. Clearly noticeable are his headset and Ellis' Cap, as well as his default hat.

Gibs, or giblets (/ˈdʒɪbləts/, /ˈɡɪbləts/, pronounced "JIB-lets" or "GIB-lets") refer mainly to the various bloody bits and pieces of a player's body that are left after the player has been killed in a specific manner, often explosive in nature. When a player is gibbed, their body parts may be highlighted on the Deathcam. Additionally, the Horseless Headless Horsemann always drops its own unique gibs on death.

The term gibs also encapsulates debris left by destroyed buildings, stickybombs, Sappers, Razorbacks, Guitars, Robots in Robot Destruction, props, and the fallout from the explosion upon the attacking teams' victory on the final stage of a Payload map. "Gib" can also be used as a verb, e.g. "gibbing" someone, meaning reducing an enemy to gibs by blowing them up with a rocket or grenade.

Players can gib themselves on command by entering explode into the console (similar to suiciding by entering the kill command into the console), or by having the command bound to a key. When playing Mann vs. Machine, both players and robots will only gib when forced by either decapitation or the Bombinomicon. However, giant robots will always gib on death, unless they are killed by energy weapons such as the Cow Mangler 5000.

The server setting tf_playergib can also be used to modify gibbing behavior: when it is set to '0', players will not gib at all, no matter what kills them. When set to '1' (the default setting), gibbing behavior is as normal. Finally, with the setting tf_playergib 2, players will gib when killed by practically any means - be it a backstab, environmental kill, or Shotgun blast. This does not alter the behaviour of gib-related achievements.

Deaths caused by the following can result in the creation of gibs:

Deaths caused by the following will result in the creation of only the head gib:

A weapon able to create gibs, with the exception of weapons capable of decapitation, will do so if fatal damage is greater than or equal to the victim's remaining health plus 10 (e.g., a 60-damage-dealing hit would gib a player with 50 hitpoints remaining, but would not gib one with 51 hitpoints), or if the fatal damage is under the effect of mini-crits or crits.

Birthday mode servers and censored versions of Team Fortress 2 have completely different types of gibs. They can also be enabled client-side by equipping a Pyrovision-compatible item or with the -sillygibs launch option.[1]