Brimstone is a community-created Payload map added in the Scream Fortress 2016 update. Brimstone was contributed to the Steam Workshop, and is a Halloween version of Fifthcurve.

Go into the light!

With the exception of the two buildings housing the BLU Base and BLU's forward spawn, all buildings are marked for RED, with a number of interiors decorated as Redmond Mann's personal quarters or offices. The battle portrays BLU pushing the risen Redmond in the Payload cart to deliver him back to Hell; Blutarch and Veikko are already there, waiting.

The map features the voice of Merasmus, who casts spells on players for their suffering. The Horseless Headless Horsemann, the Skeleton King and his minions, and MONOCULUS may appear. Merasmus himself may even appear if too much time is taken in the last area.

Comparing this map with the previous year's Hellstone map, both are single-stage, five-point Payload maps having about the same distance to cover. But, whereas Hellstone is close and tight, Brimstone is more open with long sight lines and a series of defensive upper-story sniping positions. Progressively stronger bosses can spawn ahead of the cart as it is pushed through both maps. Instead of monsters spawning at guaranteed predictable events, this map's monsters spawn with some spontaneity. Maybe the Horsemann or MONOCULUS will show up when the cart gets far enough, maybe not. Maybe Merasmus will show up soon after the fourth point is captured, maybe only as the cart is on the edge of the Pit, or maybe not at all.

In the spaces between the last two capture points lie a number of scattered coffins showing a white light within. Sometime after the fourth point is captured, the lids of these coffins disappear and a hidden haunted calliope winds up and plays Misfortune Teller. Players who "go into the light" are transported to a Hell populated with rare Magic Spells, Skeletons, and, usually, other players shooting at them.

Brimstone was contributed to the Steam Workshop.

Note: The map's 5 control points are named after spellbook pages.

Also Note: If you're having trouble with finding the locations listed here, you can scroll down to the Helpful overview section to see their exact position marked on the map. 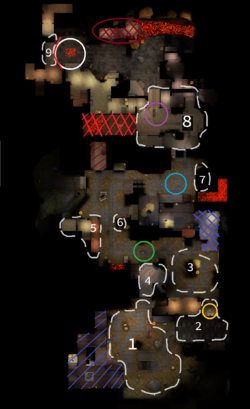 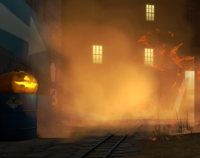 Several of the spells that Merasmus casts have effects similar to those experienced on Ghost Fort or Moonshine Event; however, many spells he casts have no effect other than a sound cue. Spells that have notable effects on players include:

The Halloween enemies have randomized chances of spawning at various times or capture points.

"Go on, pretend Merasmus isn't even here." (see General Merasmus Strategy) General mechanics for dealing with or exploiting the monsters on other maps apply here as well. However, even if there may be various tactical reasons to attack certain monsters, in general no objectives or achievements are to be gained by attacking the monsters in any form. The monsters are there only as distractions and disruptions, adding chaos and spontaneity to the holiday theme. Player's interaction with the monsters should be avoiding monster damage to their own team while encouraging as much monster damage as possible to the other team.