Gravestone is a community-created Payload Halloween map added in the Scream Fortress 2018 update.

To win the round, BLU must push the scrumpy into the giant witch's cauldron. Magic Spells spawn from cauldrons scattered around the map. Ghosts wander the map. MONOCULUS and the Horseless Headless Horsemann may appear. Soul Gargoyles also appear. It is a Halloween version of the custom map Rumble.

Gravestone was contributed to the Steam Workshop.

Every Witching Hour, accompanied by the sounds of either witch cackles or the Misfortune Teller, two doors and three coffin lids around the map open white portals through which players can enter an Underworld Island. Players entering the Island at full Heath receive an Overheal and a very brief Invulnerability while injured players receive only a brief Healing. While on the Island, players suffer Underworld Health drain and are killed if they touch the Stygian waters; however, they may pick up respawning Rare Magic Spells there before dying or exiting. Players that use the glowing white exit portal receive Overheal, Invulnerability, and Critical hits.

Entering a purple MONOCULUS portal takes players to a small Graveyard. Every time the MONOCULUS tele-portal opens, one Rare Magic Spell spawns in the Graveyard for some player to pick up; however, when a MONOCULUS death-portal opens, there are five Rare Magic Spell to pick up. The Graveyard may be exited through the glowing white portal surrounded by Pitfall. Staying too long will drain the player's health. Players that use that exit portal receive a brief Healing.

When a Payload round ends, all players are transported to a Mansion in the Underworld. Winners of the Payload round are given a head start in a Bumper Car Race to the top floor of the Mansion. Shortly after the start, Merasmus and Skeletons appear in the Yard, following the racers and attacking the slowpokes whose only defense is to drive! Shortly after a player wins the race, two more Skeletons appear in the circles near the finish line and work their way down to wipe out the remaining losers.

The map has three distinct sections for the Payload. Locations are also given for the Bumper Car Race: 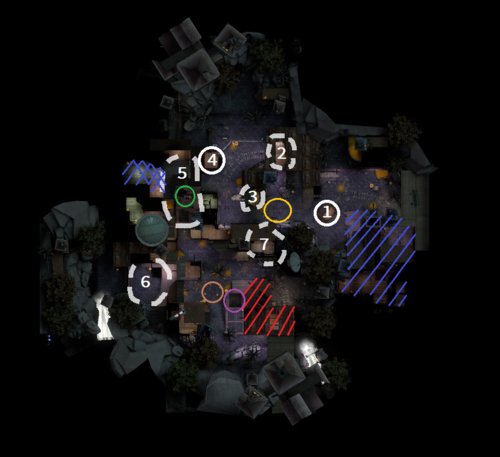