Hellstone is a community-created Payload map added in the Scream Fortress 2015 update and the first map in the Stone™ Series. It is a Halloween version of the custom Payload map Millstone, and takes place near Hell. It portrays Zepheniah Mann's Australium mine in the Badlands, and a poster in the mine is dated to late 1850, the year of Zephaniah's death. The entire map is modeled in dilapidated RED-themed wood construction, with the single exception of the Veikko Industrial building housing the BLU Base.

Zephaniah Mann's Australium mine in Badlands.

From that base, BLU is contracted to carry "Veikko the MANNLY BLU Ghost" to Hell. The Payload cart holds Veikko's ghost, and any RED player who approaches the cart will be scared. When certain checkpoints are reached by BLU, ghosts, skeletons, the Horseless Headless Horsemann, and MONOCULUS spawn.

Some of the few rare magic spells are unlocked in locations advantageous to the RED team's defense; however, if cart progress is slow, the monsters will spawn in or behind RED's defense.

Hellstone was contributed to the Steam Workshop.

The first two stages of this map follow a narrow road that enters into a wider yard before winding through a two-story building and entering the final Hell Pit stage.

In the second half of the map, the track winds through a two-level building called Hells Bells with multiple ways between the levels. 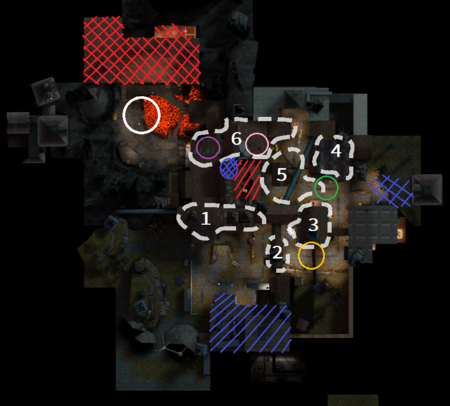 The various monsters spawn at captures of specific stages. Also, if the points are not captured soon enough, additional skeletons and certain boss monsters will spawn.

The Hellstone Witching Hour feature consists of two non-repeating events. The clock face has two minute hands. These hands step around the clock face at different paces. After 5 minutes, the faster hand reaches 12, the clock face turns green, and 6 skeletons spawn in two groups at opposite ends of the Yard. At almost 8 minutes, the other minute hand reaches 12 and a MONOCULUS spawns near the Hells Bells point. Both of these two events are designed to spawn monsters in the rear of a fast BLU ​offense ​​or in the middle of a strong RED defense.

If there is more than one MONOCULUS active after the fourth point, their health bars share the same space in the HUD. The most recently damaged MONOCULUS will show its health on top.

General mechanics for dealing with or exploiting the monsters on other maps apply here as well. However, the monsters that are present change over the course of the map; so monster-specific class selections and load outs can also change as the cart and time progresses in the round. The monster spawns are completely predicable and both teams should be ready for them.