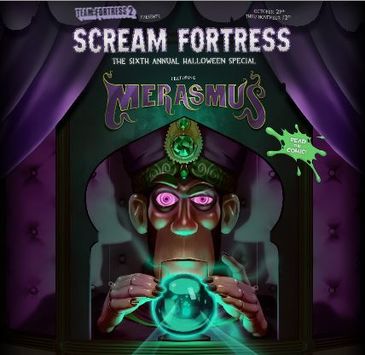 This article is for content released in the update. For the patch itself, see October 29, 2014 Patch.

Scream Fortress 2014 was a major update that featured a carnival operated by Merasmus, the story of which was introduced in the comic Blood Money. It introduced bumper cars as the post-round activity, featuring three separate tracks/modes. It was the sixth Scream Fortress update. All players who logged into Team Fortress 2 after downloading the update received a Halloween Gift Cauldron, which contained three random Scream Fortress 2014 items, one of these items always had both Strange and Haunted quality.

The update brought 50 new cosmetics, 6 achievements, the Halloween event map Carnival of Carnage as well as the Kritz or Treat Canteen and the Necro Smasher: an all-class (except Spy) melee reskin.