Bloodwater is a single-stage Payload map with four checkpoints for the BLU team to capture. It was added during the Scream Fortress 2020 update and is a community-made Halloween-themed version of Badwater Basin. The setup timer is 1 minute and 10 seconds.

Bloodwater was contributed to the Steam Workshop.

In this map, BLU must push a cart through three checkpoints all the way to RED's base. The cart drops magic spells as it moves. The clocktower shows how long until the next Witching Hour and how long until it ends. Players can try their luck in the Underworld for a chance at an advantage in the battle.

Every Witching Hour, spells appear across the map, along with one of two bosses: the Skeleton King or MONOCULUS. 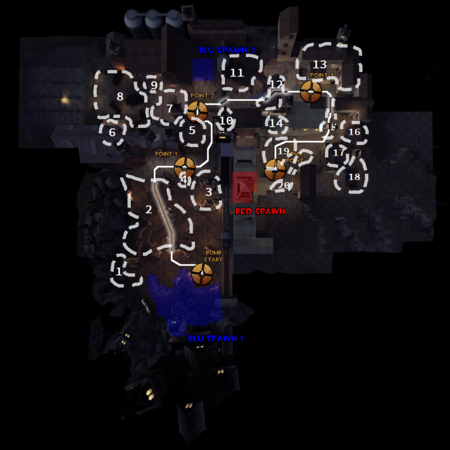 Bloodwater's Underworld features two areas, one made up of small islands and one with one big island with a giant horned skull. It can be accessed through the portals left by MONOCULUS whenever it teleports or dies. The portals created when it teleports take players to the small islands, and the one created when it dies takes players to the giant skull island. When players appear in the Underworld, they are fully healed and are briefly invincible.

The small islands portion features several regular and three rare magic spells (one on each side of the white portal and one behind it), as well as a health draining effect. The giant skull island does not feature a health draining effect or magic spells, but offers a short distance from its spawn point to its exit; players should still be quick, however, as the island is engulfed in a series of explosions if they take too long to leave. Going through the white portals takes players back to their spawns with temporary invincibility, speed boost, crits, double their maximum health, and a random rare magic spell.