From Team Fortress Wiki
Jump to: navigation, search
This article is for content released in the update. For the patch itself, see October 6, 2015 Patch.
This article is about an official update. For information on the scrapped game concept, see Invasion. 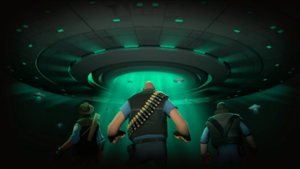 To promote the update, the Team Fortress 2 Podcast KritzKast created a series of humorous radio skits portraying a radio news station broadcasting the events of the alien invasion.