From Team Fortress Wiki
Jump to: navigation, search
This article is for content released in the update. For the patch itself, see February 24, 2009 Patch. 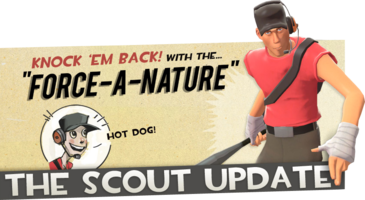 The Scout Update was the fourth major content update for Team Fortress 2.

The update was mainly focused on the Scout. In addition to three new weapons, the class gained several unique voice responses to his new weapons and gameplay events, adding further immersion for players.

Three community-created maps (Egypt, Watchtower, and Junction) were established as official due to their outstanding quality. A large patch was also made to the existing map Fastlane. A further map, Pipeline, was teased on Day 3 of the update as the backdrop, but would not be released until later.

The Scout Update was released in the February 24, 2009 Patch.

While the Scout Update carried on the day-by-day release system previously used by the Heavy Update, it also began a trend of community influence on the way in which content was given. Players could determine, through a voting system, the unlock order of the weapons through achievement milestones.