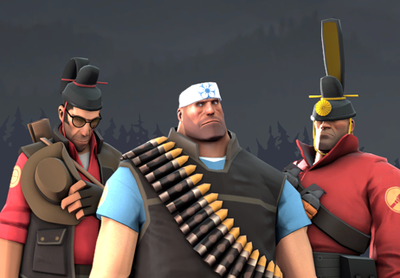 This article is for content released in the update. For the patch itself, see March 23, 2011 Patch.

The Japan Charity Bundle update was a bundle of cosmetics and noise makers introduced in the March 23, 2011 Patch. It introduced three cosmetics and two noise makers in the Mann Co. Store, which could be bought until April 7th. The associated bundle included two of said cosmetics, the Humanitarian's Hachimaki and the Benefactor's Kanmuri, while the Magnanimous Monarch had to be be purchased separately. The proceeds from item sales directly funded the American Red Cross relief operations in Japan following the 2011 Tōhoku earthquake and tsunami. By March 29th, the charity had raised over $300,000, and the final tally on April 8th was $430,543.65.

The sound clips for the "Prayer Bowl" Noise Maker are present in the game files, however, no Noise Maker item exists to use them, and as such, they are not included in the Charity Bundle.