From Team Fortress Wiki
Jump to: navigation, search
This article is for content released in the update. For the patch itself, see August 19, 2008 Patch. 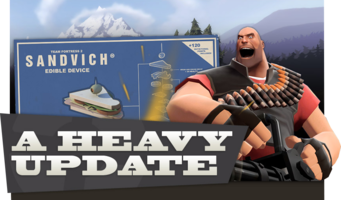 The focus of the update was the Heavy class. As was customary, three new weapons for the class were revealed, and the slowdown mechanic was introduced. To accompany the Sandvich consumable weapon, Meet the Sandvich was released alongside the update.

A new game mode, Arena, was introduced. It focused on combat between the two teams and brought five new maps to the game. Two other maps, Badwater Basin and Steel, were also included.

Beginning a recurring process for major updates, portions and features of the Heavy Update were revealed on a daily basis leading up to its culmination and release into the game. Each day was marked with a page depicting at least one of the aspects, delivered in an informative and unique style.