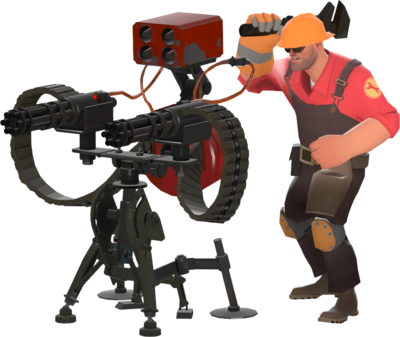 The Engineer is a unique class due to his ability to construct buildings. He can get his teammates to the front lines faster with Teleporters, create a powerful Sentry Gun to ward off enemies, and can build Dispensers to heal and supply ammunition to his teammates. The Engineer's low Health and average speed make it important for him to rely on his Sentry Gun, other buildings, and his teammates for protection. While his ways can seem somewhat passive and methodical, Engineers are not to be underestimated. A talented Engineer can make it much easier for his team to hold its ground, keep up the pressure on the attack, and defend vital objectives such as control points and Intelligence.

Of the Engineer's Primary weapons, the Shotgun is the most versatile due to its larger clip size and lack of reliance on a Dispenser, a Sentry Gun, or a specific positioning of enemies.

The purposes of the Frontier Justice are similar to those outlined for the stock Shotgun above, but the introduction of revenge crits modifies the accompanied playstyle.

The Pomson 6000 functions like the Soldier's Righteous Bison in terms of its projectiles and unlimited ammo, but instead of projectile penetration, it provides anti-Spy and anti-Medic capabilities.

The Pistol has four main strengths over the Shotgun; its greater accuracy and damage at longer distances, its large ammunition reserve, and its faster reload time. These give the Pistol several key functions:

The Short Circuit is a promotional and craftable secondary weapon for the Engineer. At the cost of 5 metal for each shot, the Short Circuit creates a small electrical charge that destroys all projectiles and does minor damage to enemies. Like the Widowmaker, it never requires reloading. However, the Short Circuit cannot score random Critical hits. 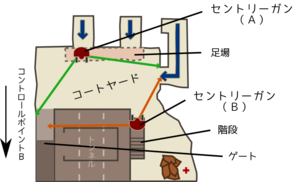 Figure 1. Dustbowl, Stage 2, Point B example of excellent Sentry placement. Both Sentries A and B are on high ground in open areas covering chokepoints, with double coverage of two major chokes. Both Sentries are nearby and face each other, making it easy for each Engineer to watch the other.

Figure 2. Illustrates the advantages of elevated placement. Sentry is in the open covering a chokepoint, is able to lock on and begin firing an instant before approaching enemies, preventing abuse of cover and maximizing Sentry damage. Attacking Demomen in particular will have poor attack angles.