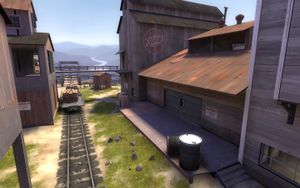 The RED spawn on Lumberyard, one of the first Arena maps to be introduced into the game.

Arena is a game mode added during the Heavy Update in which RED and BLU are pitted against each other in a battle to the death. The goal for both teams is to kill all of the opposing team's players, with no respawning during rounds; instead, players will be sent to spectate upon death. If both teams survive one minute of fighting, a control point unlocks, allowing a team to win by capping the point.

Arena maps are designed to keep the class diversity of Team Fortress 2 while focusing goals around combat between two teams. Whereas other game modes lean towards a broad, overall strategy for the team, Arena concentrates on the specific tactical choices the teams make in a single fight.

Arena features smaller maps that play out more quickly. The round ends once either team has no players left in the arena, or when the control point has unlocked and been captured. Rounds tend to be very fast and highly competitive, with an emphasis on a team's class makeup and plans to counter the opposing team's class choices.

Arena mode is suitable for smaller matches such as three-versus-three, while still comfortably supporting huge knockdown twelve-on-twelve brawls. There are usually very few, if any, Health kits, and even then they are often far from the main action, near stage hazards, or both. Ammo boxes are also few and far between. This forces teams to rely more on Dispensers and Medics.

Loadouts changed during the countdown before the match will not do so in-game unless the player commits suicide. Changing classes and back will also work if done so before the countdown ends.

The First Blood critical hit buff is unique to the Arena game mode, and can be used to give the player an advantage against the enemy team.