From Team Fortress Wiki
(Redirected from Haunted Halloween Special)
Jump to: navigation, search
This article is for content released in the update. For the patch itself, see October 29, 2009 Patch. 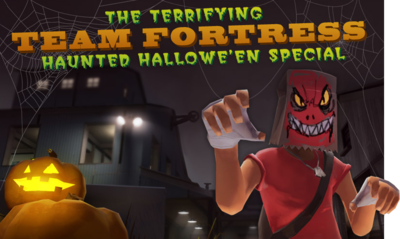 The Haunted Hallowe'en Special, officially known as the Terrifying Team Fortress Haunted Hallowe'en Special, was the first update in what would become annual Halloween events. The update was first revealed in a blog post, followed by an immediate release on October 29, 2009. Aside from fixing a few issues, the update introduced two new maps: Harvest and Harvest Event. The release of these maps was unique as it was the first time that the same map had been released in both a standard and an event variety. The patch also introduced two new hazards: the ghost of Zepheniah Mann, which was exclusive to Harvest Event, and the Pumpkin Bomb, which only appears on Halloween-themed maps. Two new cosmetics were also introduced, the Mildly Disturbing Halloween Mask and the Ghastly Gibus, as was a pack of five Halloween-themed achievements known as Scarechievements. Finally, the patch introduced the Halloween pumpkin; a special pickup item that only appears on Halloween-themed maps and randomly drops when a player is killed.

In addition to the new content, three hidden pages were discovered shortly after the update was launched; the Last Will and Testament of Zepheniah Mann, the Mann Family Portrait, and the Ghastly Gibus page. The Last Will and Testament page related the history of Zepheniah Mann and his acquisition of land in frontier America. The Will also hinted at the rivalry between Redmond Mann and Blutarch Mann, which has fuelled the conflict between RED and BLU for more than a century. The Will also left complete control of Mann & Sons Munitions Concern to Barnabus Hale, ancestor of Saxton Hale, CEO of Mann Co.

The third hidden page first revealed the Ghastly Gibus which, like the Gentle Manne's Service Medal, was a limited edition item made available to players outside the game itself. It was awarded to the first 10,319 users who accessed the hidden page and entered their Steam ID. Unlike the Service Medal however, all players had the opportunity to acquire the Gibus, as it was later revealed in a blog post (also posted on October 29, 2009) that players could receive their own Ghastly Gibus if they completed the Ghastly Gibus Grab Scarechievement, which could be obtained by dominating an enemy player wearing the hat.