From Team Fortress Wiki
(Redirected from Item)
Jump to: navigation, search
This article solely refers to the items featured in Team Fortress 2. For specific item pickups such as health, ammo and metal, see Pickups. 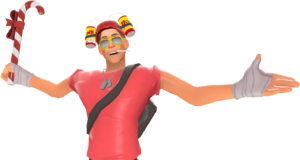 A Scout equipped with three items: the Candy Cane (a weapon), a Bonk Helm and a pair of Summer Shades (cosmetic items).

Items refers to objects that players can collect and use within Team Fortress 2. With some exceptions, weapons are the only type of item in the game to directly influence gameplay; all other items are purely cosmetic.

There are five types of items:

The most common way to obtain items is through the item drop system; after a certain amount of time in game while playing (does not count idling), the system will distribute a random item to the player. When received, the item is placed in the player's backpack and the game displays the newly earned item on screen, as well as alerting the rest of the current server with a text message. Items that can be obtained via this method include weapons, Mann Co. Supply Crates, certain cosmetic items, and tools. There is a cap on the amount of playtime each week in which drops can be received, after which no further items are received via drop for the remainder of the week.

Items awarded through the Achievements system are designated Achievement items and are not tradeable.

Items can be bought directly from the Mann Co. Store using money from the player's Steam Wallet. Introduced in the Mann-Conomy Update, the Store provides players with an alternate way of obtaining items instead of waiting for them to drop, crafting, or trading for them. Creators of community-contributed items receive a percentage of sales revenue for their creations.

In the past, items bought from the Mann Co. Store were originally neither tradable nor usable in crafting (with the exception of tools such as the Paint Can). However, bonus items received from the store (such as the bonus item given for spending at least $20 on a single transaction, before the Mann Co. Store Package was introduced) were usable in crafting, and using the Gift Wrap item from the store on another item enabled it to be traded to other players.

Currently, any cosmetics purchased from the Mann Co. Store since the November 21, 2012 Patch can be used in crafting.

Players can craft unwanted or duplicate items (such as weapons) into other items like cosmetic items or metal. To craft items, the player must use blueprints. If a player attempts to craft items together that do not match a blueprint, no new item will be crafted, and the ingredients will be returned to the player's backpack.

Players can receive items from other players through gifting. The Gift Wrap tool allows a specific item, even ones that are usually untradable, to be traded to other players (including offline players). There are a number of other Gift tools which, when used, drop items to players currently in the server. Certain tools will drop random items, while others will drop specific items. 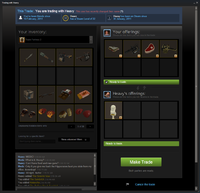 The trading system allows players to swap items for other items, provided the items are tradable.

Since the February 3, 2011 Patch, promotional items tend to be granted in Genuine quality.

There are several event-specific items such as the Mildly Disturbing Halloween Mask, Halloween Masks, Golden Wrench, Gentle Manne's Service Medal, and Saxxy, that can only be obtained at specific times.

Every time a player levels up their dueling badge (by winning ten duels), the player is awarded a 5-use Dueling Mini-Game, and a random drop; this random drop may be anything that is regularly dropped, such as weapons, cosmetic items, or tools. Supply Crates may not be obtained in this manner.

Community items are distributed manually by Valve to reward extraordinary community contributions. Historically, these items have been awarded to users for submitting outstanding maps or models (via the Steam Workshop), for assisting Valve in language translation or locating bugs or exploits within the engine. Community items were also awarded in other circumstances, as well; self-made item versions are given to players who create items that enter the game officially (via the Steam Workshop, or through a contest such as the Art Pass Contest). The Wiki Cap is awarded to players who have proven to be valuable contributors to the Team Fortress Wiki.

Players can purchase items from the Steam Community Market using the funds available from the user's Steam Wallet. Items can be sold from the Market home page or directly from the user's backpack. Currently, the list of marketable items includes tools, Festive and Botkiller weapons, Unusual and Strange quality items, Killstreak Kits, Killstreak Kit Fabricator, Killstreak weapons, Chemistry Sets and items in Vintage, Genuine or Haunted quality. When selling an item on the Market, a fee of 10% of the desired funds is added to the asking price. Any items purchased from the Market are immediately added to the inventory of the user that purchased it, while the funds go into the Steam Wallet of the user that sold the item.

Completing contracts assigned through the ConTracker will award the player with exclusive items, including cosmetic items, War Paints and weapons, among other rewards. The Mercenary Park contracts also award Blood Money, which may be redeemed for prizes of the player's choice in the Mercenary Park Gift Shop. Completing a contract's secondary objectives is not necessary to receive its rewards; the player is only required to turn in the primary objective. Each contract displays its required weaponry, if any, as well as its completion rewards, before the player accepts it. In the event that specific weapons are required to be used to complete the contract, the player may request to temporarily borrow them through the Loaner Program, until the contract is turned in.

A number of items have been retired, which means they are no longer available through the Mann Co. Store, through crafting, through the item drop system, or as Unusual items obtained from crates. The only ways to obtain retired items are to trade for them, receive them through gifts, purchase them through the Steam Community Market, or, in the case of the retired cosmetic items, uncrate them from crates that contain them.

Limited Quantity is an attribute added to items that are no longer obtainable from crafting, item drops, crates (unless the crate is listed in the description), or the Mann Co. Store. Items with this attribute that are tradable can be listed on the Steam Community Market.

Levels are a purely cosmetic feature and have no actual impact on gameplay. The cosmetic items released during the Scream Fortress Update are all level 31, representing the day that Halloween falls on (October 31st).

Item quality is a cosmetic feature that is included in all backpack items. It is assigned based on when and how the item was obtained and is identified by the color of the item name when viewed in game or from within the backpack. For example, Stock weapons such as the Scattergun are of the "normal" quality (grey), and unusual items such as Horsemann's Headtaker are of the 'unusual' prefix (purple). Items acquired before the Mann-Conomy update feature the Vintage prefix and have their name colored blue.

The backpack stores all items earned by a player. By default, all backpacks contain 50 slots to store items. Once upgraded to premium, the backpack will be upgraded to 300 slots (6 pages of 50 slots each). Additional slots can be added using the Backpack Expander tool, to a maximum of 3000 slots (60 pages).

There are two methods in which other players will be able to see items, including their painted color, rarity, name and description. The first is that after death, the deathcam will show the player responsible, and also display the full information of a non-stock item they have equipped. The second method is via inspection, where hovering the crosshair over a teammate and pressing the inspect key (F by default) repeatedly to cycle through the non-stock items they have equipped.