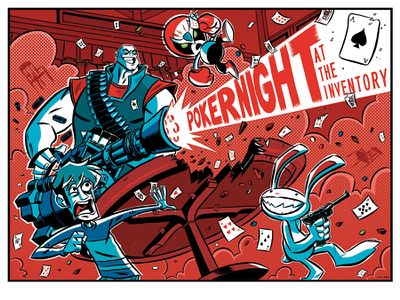 Promo art for Poker Night at the Inventory.

Promotional items in Team Fortress 2 are exclusive items made available to players through Valve's marketing partnerships with other video game companies, as well as through their own games. Players who purchase selected items from Valve or their partners, usually within a specified timeframe, will receive the item(s) advertised. If purchased during the promotional period and kept as an unsent gift, the recipient of a gifted game with an associated promotional item will receive the item regardless of whether or not the promotional period had long-since passed.

Promotional items released before the February 3, 2011 Patch, with the exception of those earned through gameplay, are typically no longer earnable and can only be acquired through trading or gifting. Since the introduction of the Genuine quality, all promotional items (with the exception of the Aperture Labs Hard Hat and Resurrection Associate Pin) have been obtainable via one or more alternate methods – purchase, crafting, or item drop. Promotional items obtained via one of these non-promotional methods do not have Genuine quality.

Multiple promotional items have been glitched from their original Unique quality into Vintage quality, or even into uncraftable and untradeable quality. These items are substantial in rarity, but the processes used to obtain these rare items were mostly fixed with the introduction of the Genuine quality for most promotional items, and a few other side fixes.

This section documents items promoting external community activities, such as contests or charity drives. For a full list of obtainable community medals, including ones obtainable through in-game activities, visit the Community Medal page.

Any remaining codes that grant a promotional item may still be redeemed, even if its associated promotion has expired.

The Binding of Isaac: Rebirth

Jagged Alliance - Back in Action

Lara Croft and the Temple of Osiris

See also: Lara Croft and the Temple of Osiris (Wikipedia)

Magic: The Gathering - Duels of the Planeswalkers 2012

Poker Night at the Inventory

The Witcher 2: Assassins of Kings

This section documents items promoting external community activities, such as contests or charity drives. For a full list of obtainable community medals, including ones obtainable through in-game activities, visit the Community Medal page.

Journey to the East

Tip of the Hats