From Team Fortress Wiki
(Redirected from Meet Your Match)
Jump to: navigation, search
This article is for content released in the update. For the patch itself, see July 7, 2016 Patch. 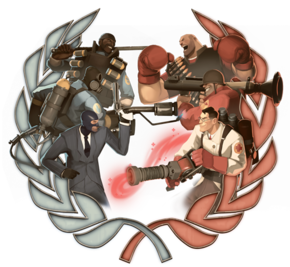 These items are given to those who purchase Disgaea PC, or purchased through the Mann Co. Store.

Announced with the Meet Your Match Update was the Heavy vs. Pyro war. As mentioned on Page 2 of the update, Heavy and Pyro were fighting for which class would be the first to receive a class-specific pack in a future update that would bring new rebalances, weapons, achievements and more. Upon launching the game after the July 7th, 2016 Patch, players were able to pick a side in the main menu. Scoring points as any class in either Casual Mode or Competitive Mode would count towards the player's "vote", whose total accumulation represented by a percentage for each side. The event started on July 7th and concluded on August 14th 11:59 PM.

At the conclusion of the event, Team Pyro won with 56% of the total votes while Team Heavy received 44%, thus guaranteeing that the Pyro would receive the first class pack. Over a year later, the Jungle Inferno Update released the new Pyro class pack.

Two new achievements were introduced in this update.